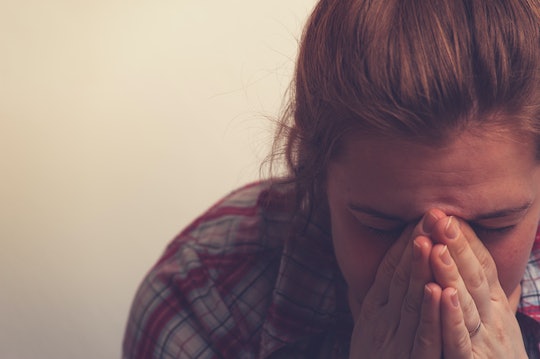 People Still Think Domestic Violence Is Too Taboo To Talk About, & It's Hurting Families

As parents, many of us would like to think that our kids will be inheriting a better world, and that the progress we're hopefully making will mean things will be different for them as they grow. In general, it might be easy to assume that's exactly what's happening — just look at the #MeToo movement — but the reality, at least when it comes to domestic violence? There's still a long way to go. A recent national survey conducted by the Allstate Foundation Purple Purse organization found that not only do people still think domestic violence is too taboo to talk about, it turns out that more people think that way in 2018 than they did four years ago. Specifically, the survey found that, while 62 percent of Americans considered domestic violence to be an "extremely serious problem," 34 percent thought it wasn't OK to actually discuss — a 10 percent increase from 2014.

The encouraging news, at least, is that the majority of people surveyed agreed that domestic violence is a problem. Because it is. A big problem. In fact, the statistics are straight up alarming: according to the National Coalition Against Domestic Violence (NCADV), 1 in 3 women and 1 in 4 men have been victims of physical violence by an intimate partner, while for 1 in 4 women and 1 in 7 men, that violence was "severe." Nearly 20 people per minute are physically abused by an intimate partner — more than 10 million women and men each year — and if that isn't horrifying enough, on average, more than three women are murdered by their partners every single day, according to the American Psychological Association.

In general, it's hard to think that so many people feel hesitant to discuss domestic violence, but when you consider the scope of the problem, it's even more problematic. For one, not only is domestic violence literally life-threatening — women are more likely to be killed by their intimate partners than by anyone else, according to the Centers for Disease Control — there are also major implications for the entire family. More than 15 million children in the United States live in homes in which domestic violence has happened at least once, according to the U.S. Department of Health and Human Services, and those children are at a higher risk of entering into abusive relationships as adults, or of becoming abusive towards their partners. They also face a higher risk of long-term physical and mental health problems, including depression, anxiety, diabetes, obesity, and heart disease.

When we are afraid to discuss domestic violence though, and treat it like the very serious problem that it really is, it means it becomes significantly harder for those being abused to actually escape and get help. Already, a woman trying to leave an abusive partner is facing a huge challenge: according to NCADV, the most dangerous time for a domestic violence victim is right after they leave the relationship. And not just because of the very likely reality that they'll face ongoing harassment or threats — according to NCADV, 1 out of every 5 homicide victims with restraining orders are murdered within two days of obtaining the order, while 1 out of every 3 are murdered within the first month.

What's more is that many women who want to escape their abusers are too afraid to even call the police. Yet their fears aren't unfounded: according to USA Today, a 2015 survey by the National Domestic Violence Hotline found that 25 percent of women who had called police to report domestic violence or sexual assault would not call again in the future. The reason? Many felt their concerns weren't taken seriously, and that the very act of calling the police just ended up putting them in more danger.

Interestingly though, the very same police officers whom many women found unhelpful are themselves placed in greater danger as a result of domestic violence. According to USA Today, more officers were shot responding to domestic violence in 2017 than any other type of firearm-related fatality. And, just in case there are any lingering doubts that domestic violence is something everyone should care about, there's also the fact that, of the 46 public mass shootings that took place between 2009 and 2016, one-third of the shooters had a reported history of violence against women, according to TIME.

In other words, our general inability and unwillingness to treat domestic violence like the threat that it is means that people are dying unnecessarily, and most of those people are women. And while it might be easy to turn a blind eye — to assume intimate partner abuse is somehow something we shouldn't get involved in, or perhaps just something that can be ignored because it may not directly affect us — the effects of domestic violence are actually incredibly wide-reaching. In not talking about it, or by refusing to make it our business, we're implicitly allowing it to continue. And as long as it remains taboo, the generational cycle of abuse, violence, and death will inevitably continue.