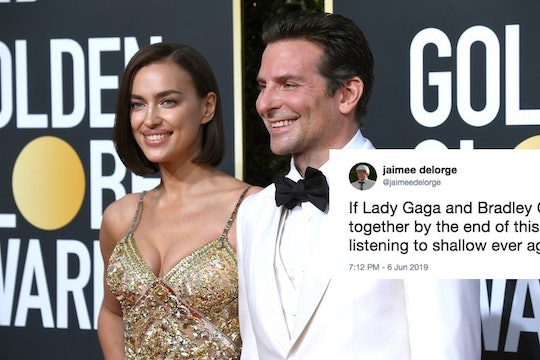 Ever since Bradley Cooper and Lady Gaga's re-make of A Star Is Born, fans have had a difficult time separating the classic love story from reality. And after the duo performed "Shallow" live, it only got worse. Because although Cooper and Gaga's characters in the film fall in love, they are merely actors. The fact that so many people were convinced there was "something more" going on IRL is a testimony to their phenomenal acting skills. In light of recent news regarding Cooper's relationship status, I'll just say it again for the people in the back: People, stop making Bradley Cooper and Irina Shayk's reported breakup about Lady Gaga.

Romper has reached out to Cooper's publicist, but didn't immediately hear back. On Thursday evening, June 6, People reported that Cooper and his girlfriend of four years, Irina Shayk, have called it quits. The couple had started dating in spring 2015, and they welcomed a baby girl named Lea in March 2017. According to People the Oscar-nominated actor and the supermodel are "amicably working out how to share custody" of their daughter.

Although neither Cooper nor Shayk have yet confirmed this report, it seems that Twitter has already taken the news as fact. And honestly, the reaction is pretty, erm, disheartening. One Twitter user wrote, "If Lady Gaga and Bradley Cooper don’t get together by the end of this year i’m never listening to shallow ever again."

Another person tweeted, "lady gaga & bradley cooper are both single just 4 months after they eye f*cked at the oscars how convenient."

Yet another Twitter user shared a GIF of Gaga jumping into the football stadium during her 2017 Super Bowl performance, writing, "Lady Gaga heading to Bradley Cooper’s house after hearing the break up news."

Meanwhile, another person chimed in with, "Bradley Cooper never looked at Irina the way he looked at Lady Gaga." Ouch.

See what I mean? If the report turns out to be true, I'm sure both Cooper and Shayk are already feeling pretty terrible right now. Because breakups are hard — and even more so when there's a child involved.

Of course, it's not exactly a new thing that fans of A Star Is Born are rooting for for Gaga and Cooper to become an item. It happened well before Lady Gaga ended her engagement with Christian Carino in February. (The duo's passionate performance of "Shallow" at the 2019 Oscars did nothing to quell these rumors, either.) And let's not forget about Gaga's widely-mocked quote regarding Cooper taking a chance on her for the role of Ally. That only added fuel to the fire. "There can be 100 people in the room, and 99 don't believe in you. But I had this one [points to Cooper] incredible talent with me," she would say, in various forms. (Gaga even got roasted for it at the 2019 Grammy Awards, according to Glamour.)

Even with all of this "evidence," people seriously need to CTFD. Because newsflash: Ally and Jackson are fictional characters; Gaga and Cooper are real people living real lives. It's perfectly normal for coworkers to have respect and admiration for one another. And let's not forget it's literally their job to make you believe Ally and Jackson's love is real. They obviously did a spectacular job. But it's called acting for a reason.

This tweet sums up my thoughts perfectly. A Twitter user wrote, "The fact that there were so many people actually rooting on Bradley Cooper to have an affair with Lady Gaga truly shows just how messed up our priorities as a society are." A. Freaking. Men.

As Gaga continues to move forward after ending her engagement — and as Cooper navigates this delicate time in the wake of his reported breakup — the last thing either of them needs is this sort of commentary shipping the co-stars as a couple. So can we just not?