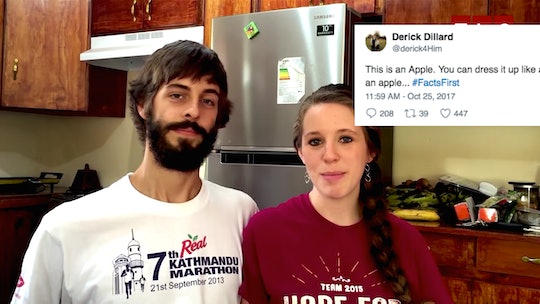 People Think Derick Dillard Tweeted Another Transphobic Message, & They Are Not Having It

Derick Dillard may have entered the spotlight as the husband of 19 Kids and Counting star Jill (Duggar) Dillard, and the couple has since become a huge hit with fans, who continue to follow their lives as young parents to two boys. But in August, Derick — a staunchly conservative Christian — came under fire for a controversial tweet about transgender TLC star Jazz Jennings, in which he argued that "'Transgender’ is a myth," and that "Gender is not fluid; it’s ordained by God." Derick later appeared to backtrack his comment, but now, people think Derick Dillard tweeted another transphobic message, and while it may not be as blatant as his original comment, it's still majorly disappointing.

Dillard took to Twitter on Wednesday to share a photo of an apple, along with the caption, "This is an Apple. You can dress it up like a banana, but it’s still an apple... #FactsFirst," according to In Touch Weekly. The tweet seems to be a clear reference to CNN's recent viral ad that hit back at President Donald Trump's infamous "fake news" claims by arguing that you can try to call an apple a banana, but that doesn't actually make it true (in other words, facts are facts, no matter what the POTUS says). That's an important message to be sure, but given Dillard's anti-LGBTQ views, Twitter users seemed pretty convinced that his #FactsFirst tweet was actually intended to be another dig at the transgender community. A representative for Dillard did not immediately respond to Romper's request for comment.

To be clear, it is of course possible that he was just agreeing with CNN's point about facts, but given that Dillard previously expressed his support for Trump and his anti-abortion campaign stance, according to Us Weekly — and given the fact that he and Jill recently visited the White House, where Dillard purchased a pair of Donald Trump-themed socks that he proudly posted on Instagram — it seems fairly unlikely that he'd be retweeting an ad that was an obvious dig at Trump himself. And judging from the slew of comments Dillard's post received, it's clear that most people also seemed to think the tweet was a response to transgender people and not to CNN.

Many users quickly called Dillard out for what they alleged were discriminatory — and hurtful — views:

While others argued against Dillard's use of his faith as an excuse for sharing his messages:

And in case there was any further doubt about his intention, others chimed in to support what they believed to be a transphobic tweet:

Dillard's most recent alleged dig at the LGBTQ community may not be as brazen as his previous tweet about Jennings, but there may also be a reason for that, too. According to ABC News, TLC issued a statement following Dillard's August tweet, and said, "Derick Dillard’s personal statement does not represent the views of TLC." As a result, rumors began to swirl that his role on the current Duggar-themed reality show, Counting On, could be in jeopardy. So although Derick and Jill still continue to be on the show, it wouldn't be unreasonable to think he may have decided to air his views in less obvious ways just in case.

That said, Dillard has continued to remain pretty vocal on other issues. Earlier this month, he tweeted "Abortion is murder! Please do all you can to oppose it." And if that weren't already irritating enough, only a few days earlier, Dillard — a 28-year-old white man — claimed in a tweet that "The US is one of the least racist countries in the world."

Derick and Jill's marriage was arguably a huge turning point for the Duggar family's reality TV success: after the original Duggar family series was axed, fans' continued interest in the lives of the newlyweds (along with that of fellow Duggar sister Jessa and her husband, Ben Seewald) allowed for the creation of the Counting On spin-off. While it was first introduced as a three-part special (Jill & Jessa: Counting On), the show is now in its sixth season, and has followed the life events of many of the Duggar kids, including Jinger and Joy Duggars' respective weddings.

It's the Dillards' likability as a couple, though, that makes Derick's comments particularly infuriating. On their show, and on social media, Derick and Jill appear to have the kind of loving marriage and beautiful young family that many of their fans' clearly admire and aspire to. And with Derick's television persona portraying him as an adoring husband and family man, for those already invested in the show and in their lives, his comments might not seem so bad. But contrary to what he might think, gender identity isn't just some concept that's fair game for ideological debate — he's literally attempting to invalidate other peoples' lives and experiences when he makes these comments. He may be uncomfortable with the facts that support gender fluidity, but it doesn't make it any less real or worthy of respect. And it's beyond frustrating that he still feels entitled to share publicly what many alleged were discriminatory views.