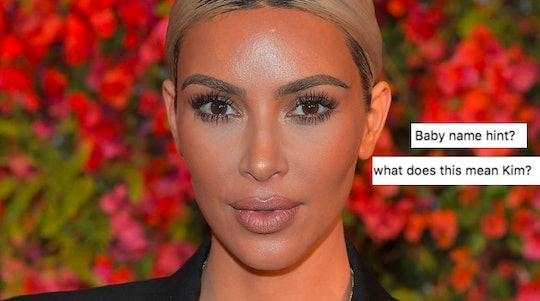 These days, it seems like the Kardashian-Jenner family will do anything to throw fans off (or have them keep talking about them). Everything they do, say, and don't say is torn apart by fans looking for clues that point them to their rumored pregnancies, breakups, and everything in between. Take Kim Kardashian's Instagram post on Wednesday, for example. Some people think Kim Kardashian's latest Instagram reveals her new baby's name and there is a possibility they could be right — or it's just possible that Kim really likes her designer goods.

Kardashian took to Instagram where she shared a close-up of a Louis Vuitton print with her followers. This immediately raised a few flags — not only does the print not fit in with Kardashian's Instagram theme, it seems a little too out of place for the star who didn't even announce her baby's arrival, who was born on Monday through a surrogate, according to People, on her Instagram feed. With the "LV" monogram being the clear and direct focus of the photo, some believed that this was a hint about Kardashian and husband Kanye West's new baby's name. I mean, why else would she go out of her way to post the photo?

"Clue to the baby's name??" one commenter wrote. "I can't take it with all this teasing with all these babies and names and hiding."

This is definitely a strong theory. And more fans seem to agree. "A clue to her daughter's name," one person wrote. "Are you hinting at a baby name, Kim?" another asked.

But this photo (especially with its lack of caption) could have been posted on accident by Kardashian or one of her children, North or Saint West — if they did, it wouldn't be the first time. In 2015, a revealing #throwbackthursday photo of Kardashian was accidentally posted to her Instagram account. She quickly deleted the photo, according to Paper, and blamed her daughter, North, for posting it when she thought that North had been playing games. Because North knows her way around Instagram, its very possible that she accidentally posted this LV monogram by mistake, too. And fans have a reason to believe this and not the fact that the photo pertains to the baby's name. Earlier in the same day that Kardashian posted this "LV" photo, West told photographers, according to People, that he and Kardashian still couldn't think of a name for the baby.

Or, it could have a deeper meaning, like fans are saying, and very much indicate that Kardashian's new daughter's initials are "LV." But what kind of name would that be? Kardashian already revealed to Ellen DeGeneres during an appearance on The Ellen Show in November that her new daughter's name had to go by some very specific naming guidelines, according to E! News. "I do like different names — but short, easy to spell, one syllable," Kardashian told DeGeneres, according to E! News. "That's my kind of vibe."

If this is the case, then there are plenty of names that begin with the letter L and fit these parameters set by the new parents. Names like "Love," "Light," "Leo," "Lace," "Lake," or "Lux" are just a few I can think of off the top of my head. As for the middle name beginning with a V? That is something that fans might have to spend a little more time brainstorming.

But it really isn't like Kardashian to keep fans guessing like this (unlike her siblings. Yeah I'm looking at you, Kylie Jenner). Especially since Kardashian was so quick to announce her daughter's arrival, just one day after her surrogate gave birth (it must have been record timing for the Kardashian family). There shouldn't be a reason for Kardashian to have to tease fans about the baby's name. But if she is, it is pretty much guaranteed that she'll release the baby's name sooner rather than later. She could barely contain her excitement over her daughter's arrival and that will more than likely pertain to her daughter's name, too.