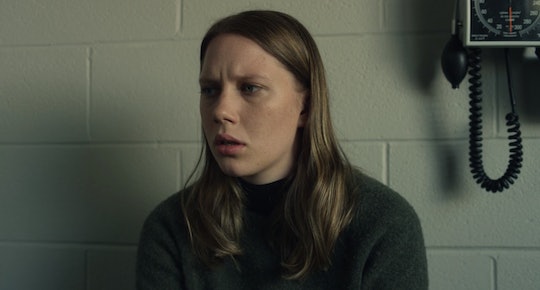 Four seasons in, viewers of the Netflix series Black Mirror have become accustomed to seeing depressing, disturbing, and disheartening scenes on the sci-fi anthology, set in the near-future when technology has proven us all to be complete monsters. But never before have they had to worry about disturbing real-world consequences stemming from the series. Now there's cause for concern, though, because a recent episode of Black Mirror, "Arkangel," spreads false information about emergency contraception that could potentially mislead viewers' understanding of how the safe, legal, medication works.

I write this as a fan of the show, not a former fan; I'll continue to binge the rest of Season 4 as long as my fragile constitution allows (I don't recommend watching more than two or three episodes back to back, lest you feel dead inside for a week or so). But this one scene from Episode 2 had a huge, glaring problem that needs to be addressed. Spoilers follow. "Arkangel" stars the fantastic Rosemarie DeWitt as a mother traumatized by the thought of losing her daughter, Sara. She has Sara fitted with an implant that tracks her location, her vital signs, and even streams her vision in real-time to Marie's tablet. I understand that the show isn't meant to depict our current reality, believe me. It's based on irrational events that seem as though they take place vaguely in the future.

The technology, as you might guess, doesn't work out so well, and years later, the fallout eventually causes Marie to abandon her tablet. The implant, however, can't be removed. When a 15-year-old Sara (Brenna Harding) doesn't answer repeated calls from her mom, Marie dusts off the old digital nanny just in time to witness a daughter's-eye-view of teen sex in a janky old van, which serves her right for snooping. She quickly falls into the habit of spying on her daughter once again, this time without her knowledge or consent. When Marie is lying in bed staring at the tablet a few days later, she receives a notification that's unseen to viewers and rushes out to the pharmacy. The next morning, she's shown crushing a pill and surreptitiously adding it to Sara's smoothie.

Later, at school, Sara gets sick, and is told by the nurse, "It was the E.C. pill that made you sick." When the teen expresses confusion, the nurse elaborates, "Emergency contraception. For terminating your pregnancy." Emergency contraception, as the name implies, prevents pregnancy when taken within 72 hours of having unprotected sex. It does not, and cannot, terminate a pregnancy. In addition to confusing uninformed viewers who may not be well-versed in reproductive health, conflating emergency contraception with abortion is a tactic often used by opponents of reproductive choice as a means of discouraging use of, and access to, the medication.

Dr. Daniel Grossman, Director of Advancing New Standards in Reproductive Health (ANSIRH) called out the show in a Twitter thread on Tuesday: "Maybe EC means something different in a dystopian future, but the emergency contraception we have now will NOT terminate an established pregnancy ... Emergency contraception doesn't cause an abortion. Period. Reproductive coercion is unacceptable. You can do better, @blackmirror @netflix." Romper has reached out to Netflix, Black Mirror writer Charlie Booker, and episode director Jodie Foster for comment.

TV and film plotlines that incorporate abortion into a variety of genres, like the science fiction of Black Mirror, are opportunities to foster new and different conversations around abortion. In 'Arkangel,' the creators could have used Sara's pregnancy to portray abortion in an innovative, futuristic way that explores how abortion, when not hamstrung by regressive, ideologically based policies, could advance technologically and medically. Instead, the show portrayed her abortion in a way that is not only scientifically and medically inaccurate—conflating emergency contraception, which prevents pregnancy, and medication abortion, which terminates pregnancy—but also missed an opportunity to imagine the future of abortion and pregnancy prevention.

As a fan, I get that Black Mirror is entertainment, not a primary source for medical advice. I'm not looking for an episode that specifically champions reproductive choice and imagines a bright future where all women have safe, affordable, and legal control over their bodies. But when it depicts misinformation which, even unintentionally, could cause harm to its viewers, it needs to step up and correct the mistake. The show featured a medical professional — who actually happened to be supportive of reproductive choice — making scientifically false statements that are identical to propaganda used by anti-choice advocates. The responsible solution would be to add disclaimers both at the beginning and end of the episode with an apology and clarification. In the mean time, you can learn the real facts about emergency contraception here.