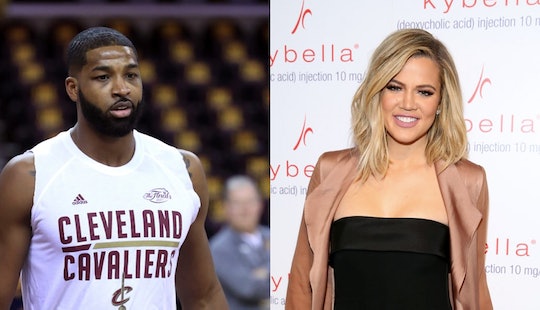 Although celebrities have seemingly the easiest lifestyles ever, privacy comes with a very high price tag. As if Khloé Kardashian didn't have enough to deal with when it comes to being pregnant in the public eye, there's now a nasty new rumor spreading that Tristan Thompson allegedly kissed another woman just days before her due date. Romper's requests for comment from both Thompson and Kardashian's team were not immediately returned.

The Daily Mail reported on Tuesday that the Cleveland Cavaliers basketball player was spotted at PH-D Lounge, a popular rooftop bar in Manhattan, over the weekend talking to another woman. Video footage reportedly taken by some unnamed people in the club allegedly show 27-year-old Thompson talking to an unidentified woman and allegedly leaning in for a kiss.

The Cavaliers played in Philadelphia on Friday night and had off until their Monday game against the New York City Knicks, according to CBS Sports, so it's possible that the team had the weekend off to be out in public. The woman who filmed the video alleged in an interview with the Daily Mail, "'I was there and he was on the table right next to us with a group of friends and some girl who he was obviously making out with all night. They were holding each other and it was so obvious."

What's more obvious is that literally no one except from Khloé and Tristan know what their relationship looks like. But that doesn't mean that some people aren't running with the rumor. And blaming Khloé for this alleged incident, which, it bears repeating, isn't confirmed at all.

Really, even if the man in the admittedly blurry and grainy video is Thompson and he was kissing a woman, it's no one's place to immediately assume that that means he's cheating on Khloé or that she doesn't already know about it. There are a lot of ways couples choose to be with each other.

Unfortunately, there are a lot of people on social media just assuming that Thompson's alleged cheating rumors are true and that somehow, it's Khloé's fault, since she met him while his ex-girlfriend Jordan Craig was pregnant with his first son, Prince, who is now just over 1 year old. No one is safe in these criticisms.

Just because both of them are famous doesn't mean that people have a right to know the inner workings of their relationship or assume that they haven't talked about these things. A lot of the blowback on social media about Thompson's alleged night at the club centers around the idea that Khloé "should have known" that dating a guy fresh off of one relationship was bound to bail on another (which again, is not officially the case).

It's really closed minded to start judging people this way. And if Tristan was, in fact, kissing another woman, people shouldn't be so quick to judge about why or how he did it. A 2016 study found that almost 20 percent of Americans have engaged in some form of an open relationship, which means having a sexual encounter with someone else, with your partner's permission. That's not to say that that's what's going on here, but it's important to note that not everyone does parenting or relationships the same way. Or that any one way of parenting with someone is any better than another way.

Seriously, only her sisters, BFF Malika, and maybe her mom, Kris Jenner, get to have an opinion about Thompson allegedly going clubbing while she's pregnant, what he does while he's out, and if anything "scandalous" happened. Even though I not-so-secretly dream of lounging on a couch in Kris' living room dissecting Khloé's relationship with Kim while Kourtney shakes my take-out salad and passes me one of those delicious iced teas they always drink, that's not ever going to happen. Therefore, whatever Thompson or Khloé does is none of my business, as much as I am kind of invested in their lives. (Hit me up, ladies.)

Life is complicated, even for the Kardashians. There's no reason to make Tristan being out at a club "a thing" or assume there was any wrong doing until Khloé wants to address it. And she will if she wants to. Being nine months pregnant is hard enough without having to handle the headlines and the haters, too.