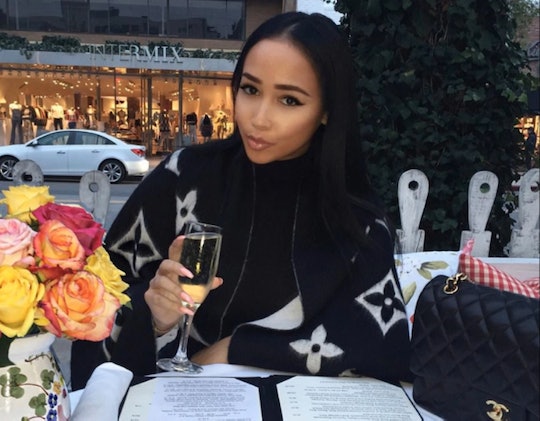 People Want Jordan Craig To Respond To Khloé's Pregnancy, & Here's Why It's Not OK

The celebrity gossip world is reeling with the news that Khloé Kardashian has finally confirmed she's pregnant with Cleveland Cavaliers player Tristan Thompson's baby, and unfortunately, some fans are taking the focus off of the happy news and trying to encourage a cat fight between the basketball player's new love and his ex. People want Jordan Craig to respond to Khloé's pregnancy, and not because they're hoping to hear well-wishes from the mother of Prince Oliver Craig Thompson, the soon-to-be big brother of the latest Kardashian kid.

Craig was pregnant with Thompson's first child when he started dating Kardashian last year, and the public is bombarding her on social media, hoping she'll have something nasty to say about the pregnancy. Last week, Craig shared the first photo of Prince on Instagram, in honor of his first birthday. But amid the heart emojis and kind words about how adorable her baby is, some are commenting and tagging her ex: "what is wrong With you don't you love your son?" And there's plenty of blame to go around: "Khole [sic] is wrong! Having a child doesn't make you a family, but Jordy & Tristian [sic] has history. Who rushes to have a baby, but no pursue marriage."

Here's a crazy idea: can't we just let this nice lady enjoy her beautiful baby, without dragging her into a public feud with the father of her child, and the mother of that child's sibling, both of whom she'll have to have some sort of relationship with for the rest of her life? Whatever messiness did or didn't happen between these three adults, their children have nothing to do with it, and the best possible outcome for those innocent kids is for their parents to have cordial, respectful relationships with each other, so they're not relegated to only seeing each other briefly in family court, or a McDonald's parking lot during visitation hand-offs.

As for the messiness, here's what we know: Kardashian and Thompson made their first official appearance as a couple at a Flo Rida concert mid-September, 2016, according to Just Jared. Three weeks later, Craig confirmed her rumored pregnancy with photos and video of her baby shower, according to People. On the Keeping Up With the Kardashians 10 Year Anniversary Special, Kardashian claimed that she met Thompson on a blind date set up by mutual friend Brandon Jennings sometime in late September, but mom Kris Jenner and sister Kim looked surprised by the story, perhaps because People spotted the pair house hunting earlier that month after taking a Labor Day trip to Cabo San Lucas together. TMZ also caught the pair leaving a nightclub within minutes of each other in late August. It's been rumored that the couple actually met at the wedding of Kevin Hart and Eniko Parrish Hart, Craig's cousin, when Craig would have been about five months pregnant.

But neither Craig nor Thompson have spoken publicly about their breakup. Many assume that Thompson left Craig for Kardashian, but Craig may have broken up with him. She could have done it months earlier, and just taken him to the wedding because his dinner was already paid for, and she didn't want to be the lone single guest at her table. It happens! Maybe this is a totally amicable situation, and Craig is happy for her ex. Maybe it's incredibly painful, and the news that Thompson is "moving on" with a new partner and child is devastating to Craig.

But either way, her feelings on the matter are nobody's business if she doesn't want to share them. If her fans truly want what's best for her, and Prince, the best thing they can do is let her speak for herself, and define her own narrative. If she wants to play the jilted ex, she'll let us know, but for right now, it seems she's more interested in enjoying life with her son, and she deserves that.