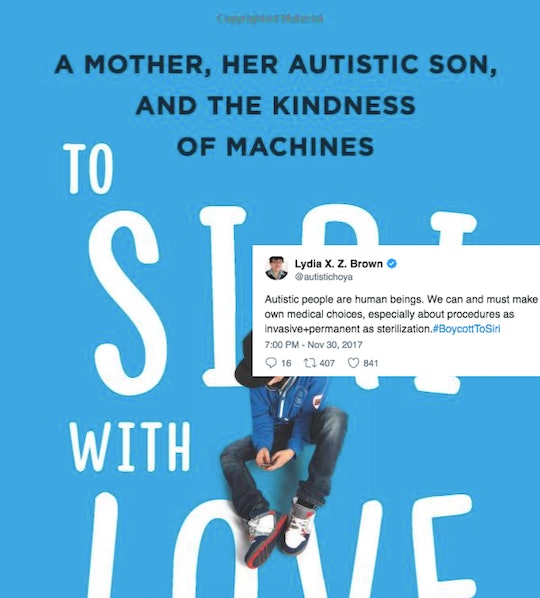 The Amazon synopsis of Judith Newman's To Siri with Love describes the stories in the recently released memoir as "touching, hilarious, and illuminating." But, increasingly, people are actually incredibly upset at the author mom, who wrote the book about her son with autism. While Newman may have set out to share what life is like for a teenager whose brain works in a way that can sometimes be hard to understand — and how one family copes with that — online commenters have claimed the writing is exploitative and even abusive. And at the center of it all is the teenage Gus, a boy who has formed a relationship with Apple's smart assistant, Siri.

To Siri with Love is the book-length expansion of Newman's popular 2014 New York Times column of the same name. In that piece, Newman detailed how Siri became a "nonjudgmental friend and teacher" to her son, who was 13 at the time. Gus had discovered a "BFF" to discuss his obsessions, which included planes, trains, buses, escalators, and the weather. But aside from keeping him occupied, Newman wrote, Siri also taught Gus — who "speaks as if he has marbles in his mouth" — to have a real, two-sided conversation with the patience of a machine.

Romper has reached out to Newman's publicist for comment but has not yet received a response.

For some, though, the book, released nearly three years after its namesake column on Aug. 22, 2017, simply goes too far — well beyond enumerating the blessings of technology for someone like Gus. It has even spurred the hashtag #BoycottToSiri on social media, where critics have started questioning Newman's parenting and judgment.

One of the leading reasons people are tweeting #BoycottToSiri is because they say the book recklessly releases intimate details about Gus' life into the world, for people he knows and strangers alike to read, discuss, and judge. Twitter user Marie Porter, who describes herself as #ActuallyAutistic in her bio, proposed a "thought" exercise to help others understand her problems with Newman's book. Imagine that you are a teenager, she writes in a series of tweets, "someone distributed a sheet of paper with private information about you on it," such as your porn-watching and bathroom habits (which Newman reportedly details in her book about Gus). Now, she wrote, imagine that the person who distributed the paper is your own mother and that the "paper" is actually a New York Times bestselling book.

At the time that it was released, To Siri with Love received a glowing Washington Post review. Jamie Fisher lauded the memoir/essay collection as a "bracingly honest chronicle of life alongside an autistic family member." In the reviewer's estimation, the book is Newman's love letter to her son, and shows that she "has nothing but deep, wide love for Gus."

Others turning a critical eye toward its pages are not convinced. Many are especially dismayed by Newman's admission in the book that she plans to seek medical power of attorney over her son when he is an adult so that she can ensure that he will be involuntarily sterilized. Understandably, this has incensed and disturbed many readers.

For her part, Newman said in a segment for The TODAY Show that she believes she will have done her job if a potential employer reads the book one day and decides to give Gus a chance because of it. It seems like Newman's intention was to help others understand her son, and those like him, a little bit better while at the same time illuminating what it's like to raise a son with autism. But perhaps there is also some value in maintaining his privacy and letting him share facts about himself publicly on his own terms, if that is what he chooses to do. The book's impact on the autistic community, as a whole, remains to be seen, but critics so far seem to think it's a net negative, especially when it comes to advocating for the autonomy of people with autism like Gus.

More Like This
Fun Ways To Celebrate National School Nurse Day
First Look: The New Jujube x Lilo & Stich Collaboration
17 Best Potty Training Products For Toddlers
From Captions To Gifts, These Are All The Kindergarten Graduation Ideas You Need