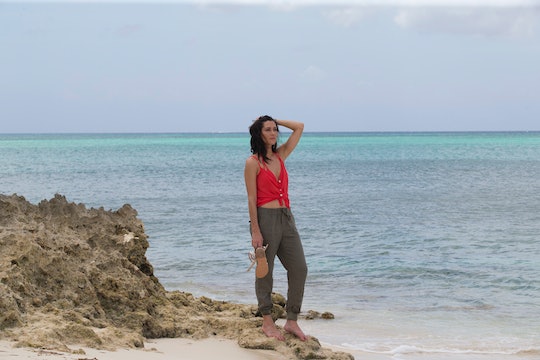 Everyone Wants To Know What Happens In The Fantasy Suites

Becca is down to her final three, which means one thing: fantasy suites. Given their somewhat controversial reputation, fans want to know if Becca has sex in the Bachelorette fantasy suite dates. While it's really not fans' business what Becca and the remaining men (Blake, Garrett, and Jason) do behind closed doors, the fantasy suites have been subject of much discussion in Bachelor Nation.

Next week, Becca and the final three are headed to Thailand. While it's a popular opinion that the fantasy suites exist so the couples can have sex privately, the point is that nobody knows. Because it's nobody's business but the people involved. Maybe the contestants will spill the beans later. Or maybe they won't.

The topic of sex came up sooner than usual this season because of Colton, who revealed to Becca that he was a virgin during their one-on-one date in the Bahamas. He said he was more focused on his football career than dating when he was younger, and that he just hasn't been with the right person yet. I give props to Colton for being so open, especially national television. Believing that he was going to be among the final three, going into the rose ceremony after hometown dates, Colton took Chris Harrison aside to express trepidation about the fantasy suite dates. Harrison told him, "How you choose to handle it — as a man — is up to you."

Well it turns out, Colton won't have to deal with it at all because Becca sent him home! The reputation of the fantasy suite dates remain, though. Even though the audience will see some of the date, what happens may remain a mystery depending on how Becca and the guys handle it — which is perfectly acceptable. Historically, it's not a given that "everyone" has sex in the fantasy suite at all. Season 8's Bachelorette Emily Maynard didn't have any fantasy suite dates, for example, because she said she wanted to "set a good example" for her daughter.

There are many examples of leads giving away some details of how their dates went. On a 20/20 special Inside the Bachelor, creator Mike Fleiss said that. "The average guy will end up having sex with three women during the course of the show." Season 4's Bachelor, Bob Guiney, apparently slept with "five and a half women." That... doesn't make any sense, but okay. And how could Bachelor Nation forget one of the biggest controversies in Bachelorette history: Nick Viall revealed on After the Final Rose that he and Season 10 Bachelorette Andi Dorfman had sex in the fantasy suite. So, it definitely does happen, but it is certainly not a given. And the public isn't entitled to know.

Last year, Season 19's Bachelor Chris Soules and Season 6's Bachelorette Ali Fedotowsky revealed how the fantasy suite dates actually work. Answering whether then-Bachelor Nick Viall would be having sex with all three women during their respective dates, Ali said, "I think a lot of people do on the show, it's not just Nick ... And from talking to the Bachelors and Bachelorettes, most do sleep with the people in the fantasy suites."

Well, I'd be lying if I said that the fantasy suite doesn't conjure up speculation about whether Becca and the contestants will get it on, but it's not our job to seek out the answer. If they reveal it, great! If not, also great! Ultimately, whatever goes on is Becca's to tell; I just hope she and the final three have a great time in Thailand, fantasy suite and all.