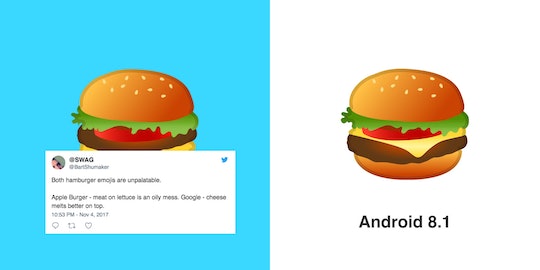 People Were Legit Furious Over The Google Cheeseburger Emoji

It looks like we're going to have to go back to fighting over politics with our relatives during December's upcoming holiday gatherings, because the other great debate of 2017 has officially been resolved. Over the past month, people have been furious about Google's cheeseburger emoji, which depicted a slice of cheese underneath the patty — the horror! — but the tech company that will one day own us all is a benevolent one, and has settled the matter once and for all. The controversy started when writer Thomas Baekdal tweeted, "I think we need to have a discussion about how Google's burger emoji is placing the cheese underneath the burger, while Apple puts it on top."

It only took about 12 hours for Google CEO Sundar Pichai to respond, tweeting that his company would "drop everything else we are doing" to fix the burger, "if folks can agree on the correct way" to assemble one. But do people really care that much? It's a debate that might have gone largely unnoticed, but it gained national attention thanks to, of all things, the Russia investigation. Stay with me, here. On the morning of Oct. 30, Fox & Friends picked up the cheeseburger emoji story, while every other major news outlet was busy covering the indictment of former Trump campaign chairman Paul Manafort.

To be fair, Fox did also mention Manafort, but the juxtaposition of such a bombshell and a — forgive me — nothingburger was just too delicious not to point out. The social media outcry over the story ended up amplifying it, which then lent legitimacy to Fox's coverage. Life imitating art, I suppose.

And so it was that a nation already divided over politics and fake news became fractured even further, with some pointing out that increased cheese-to-tongue proximity results in a tastier burger, while also protecting the bottom bun from getting soggy, and others arguing that cheese should always go on top, because... Well, nobody actually had a reason for that. I guess because that's the way we've always done it?

Curious, too, was Baekdal's choice to hold up Apple's cheeseburger as the superior emoji, when it places the lettuce on the bottom, which is weird and wrong and gross. Personally, I feel that lettuce has no place in sandwiches of any kind, because it's barely even a food, and its only legitimate function is as a vehicle for salad dressing. But I dig that some people like that crunch. You do you. However, if you're placing the lettuce underneath the patty, your crunch is lost, and you're left with nothing but a sad, wilted leaf taking up space that could better be filled by, yes, you guessed it, cheese.

But Google and Apple aren't only tech companies threatening to ruin an American institution through bizarre assembly: Samsung put the cheese between the lettuce and tomato, where it will never melt, LG and HTC act like they're too good for tomatoes, which is extremely rude, and don't get me started on WhatsApp. Is that a giant white onion slice? Mayonnaise? What on earth is going on there? Snapchat even stoked the flames with a dancing augmented reality burger filter featuring two patties and just one slice of cheese, an abomination if ever there was one.

However, Google made good on its promise, and will soon join Facebook and Microsoft in endorsing the sandwich configuration that won the popular vote. From top to bottom, the Android 8.1 cheeseburger emoji will feature lettuce, tomato, cheese, and finally, the patty.

The update, due in early December, will also fix Google's half-full beer steins and two-dimensional cheese holes, just in case those were bothering anyone. If you're not too keen on bringing up Obamacare or the Republican tax plan with your uncle next month, though, may I suggest debating the merits of turkey burgers versus beef? #TeamTurkeyForLife