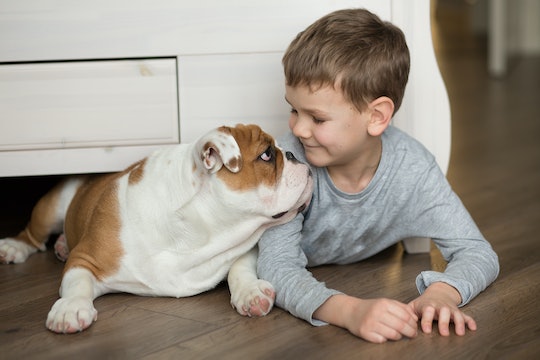 Dogs Might Help Us Live Longer, & It's Another Reason We Do Not Deserve Them

People who grew up with a dog or have one themselves as an adult know that there's a special bond between you and your pooch. But did you know they might actually improve your health? Word has it that people who own dogs may actually live longer, according to a new study, so excuse me while I just run out to my local shelter and get 12 dogs real quick.

Shout-out to "good boys" everywhere, because according to researchers in Sweden, having a dog around might possibly improve your overall health, and your cardiovascular health in particular. These researchers reportedly studied 3.4 million Swedish people history of cardiovascular disease, some of whom owned dogs, and came to a pretty interesting conclusion.

In the 12-year follow-up from when the study began, researchers evaluated how many of the participants had died, and used their data to calculate the risk of death, after adjusting for important factors like age and sex. They discovered that dog owners had a 20-percent lower risk of dying as compared to people who didn’t have a dog, at least according to this particular study, which is a pretty significant difference.

I'll give you a moment to go pet Fido or Lady and give them a handful of treats, because they clearly deserve it.

The benefits of dog ownership were especially clear in those who lived alone — they actually had a 33-percent lower risk of death, according to this study. And in particular, the study found that single adults with dogs were 36 percent less likely to die from cardiovascular disease, according to ABC News. So if that sort of thing runs in your family, it might not be a bad idea to have a dog around.

Of course, the study had its limitations, so don't take it as absolute proof that you need a dog for your health. It could be that people who live alone and have dogs have a lower risk of cardiovascular disease simply because they’re just healthier to begin with (it costs money to take care of a dog, and people with money often have access to better health care, food, and other factors that contribute to a healthy lifestyle), The Verge pointed out. But a possible lowered risk of a heart condition could maybe go in the "pro" column if you are already thinking of adding a furry friend to your home.

Mwenya Mubanga, a study author from Uppsala University's Department of Medical Sciences and the Science for Life Laboratory, agreed that the impact of dog ownership was most clear for single people, and she had a suggestion as to why that might be. Mubanga told The Chicago Tribune:

Dog ownership was especially prominent as a protective factor in persons living alone, which is a group reported previously to be at higher risk of cardiovascular disease and death. Perhaps a dog may stand in as an important family member in the single households.

The results of this study are likely especially exciting for millennials. According to a recent survey by SunTrust Mortgage, when it comes to purchasing a new home, 33 percent of millennials are more influenced by dogs than marriage or children. When it comes to the decision to buy a home, the desire to have more space and the opportunity to build equity were the only two factors in that survey that came out on top of having room for a dog, according to USA Today.

Millennials who are considering having kids will be glad to hear that having a dog around may be healthy for children, too. In the results of two studies released in October, one found that exposure to a dog can provide a "protective effect against asthma" in kids, and the other looked at how babies can be protected from eczema if their mothers are exposed to dogs during pregnancy, according to ABC2/WMAR Baltimore. In that second study, the results found that exposure to dogs can lower the risk of eczema by the age of 2, though it decreases more by age 10.

In regards to the study in Sweden, no one is really sure why the results revealed what they did. Senior study author Tove Fall, an associate professor in epidemiology at the university, said people who own dogs might live longer because they’re more physically active, or possibly less stressed. Fall told The Verge:

It could be a very efficient lifestyle intervention to get a dog. For some people that feel lonely or have problems of keeping a good lifestyle, this could be a good help.

I know from my days of being a full-time dog walker in Manhattan that it's definitely physically demanding to care for a dog, so the "more physically active" part definitely rings true to me.

Plus, the emotional impact of owning a dog could be a factor. Fall told The Verge single people might get stronger emotional support from their dogs because they don’t live with a husband (or wife, I suppose) or children. Fall said:

I got my first dog when I was single and she was my best friend. She was super important.

But whatever the reasons, it appears that having a dog can have a real impact on your health and well-being. So instead of that Netflix binge you had planned this weekend, maybe give your pup the extra walk he deserves to thank him instead.