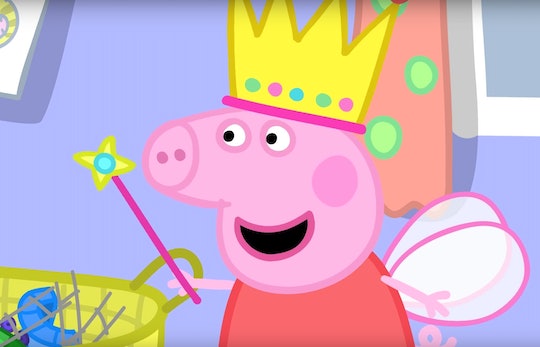 Peppa Pig's Zodiac Sign Explains SO Much About Her Personality

If you're the parent of a little one, or have been over the past decade or so, there's a good chance that there's a certain British piglet that you haven't been able to get out of your head, or off your TV. And if you ever wondered where all of that sass, spunk, and nosiness comes from, Peppa Pig's zodiac sign will make everything very clear.

Peppa Pig was born on May 30, according to Peppa Pig Fanon Wiki, meaning that she is a Gemini. If you're not familiar with Gemini traits, PrepScholar explains they're adaptable, easygoing, social, adjustable, outgoing, enthusiastic, intelligent, indecisive, impulsive, unreliable, and sometimes nosy. Additionally, according Astrology.com, Geminis are air signs who love to talk, engage with others, and are fast to express their opinions, no matter what they may be.

Geminis are also known to be "expressive and quick-witted" and "represent two different personalities in one and you will never be sure which one you will face," Astrology Zodiac Signs explains. "They are sociable, communicative and ready for fun, with a tendency to suddenly get serious, thoughtful and restless. They are fascinated with the world itself, extremely curious, with a constant feeling that there is not enough time to experience everything they want to see."

Of course, for anyone familiar with the show, all of this does tend to describe Peppa very well.

Peppa is one of the most beloved children's characters of our generation. Having aired on TV for almost 15 years, her popularity has definitely surged in the past few, according to The Washington Post. "Peppa is a pig of the people, her childish pettiness a welcome distraction from the chaos that surrounds us. Her shady antics are perfect meme fodder; it was only inevitable that someone would turn Peppa’s coldblooded response to Suzy whistling into a profane 'Thug Life' video on YouTube," The Washington Post explains, referencing a viral meme that's recently become popular from the show.

In recent weeks, Peppa's name has also been circulated regarding many fans' fascination with her physical stature. After a Twitter user suggested that they Googled Peppa's height and apparently discovered that she was an astounding 7'1" (for a baby pig?!) — and the internet, of course, had a field day, making jokes about NBA scouts trying to call her and how large her father must be.

And thanks to new music she released in the wake of all this surging popularity, publications like Dazed and PRIDE are calling her an "LGBTQ+ icon" for her unapologetic attitude toward life, and herself. In the midst of everything, The Mirror reported that all of this iconic-ness has turned her into a bona fide star, amassing a $1 billion brand (she's coming for you, Kylie Jenner...) and of course, the hearts of little kids everywhere.

It only makes sense that this sassy, self-assured, social diva is a Gemini, given her astounding business acumen, amazing job as a friend, and of course, unabashed desire to always take the spotlight. Peppa is truly an icon for the Geminis, and really always has been.