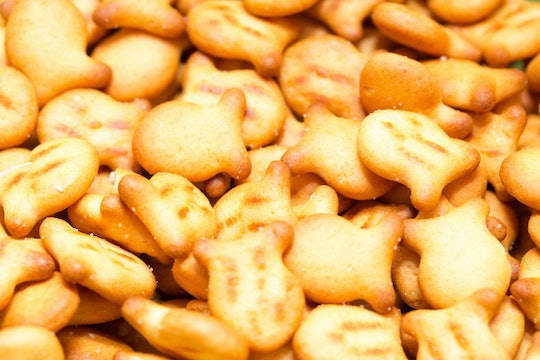 Four Flavors Of Goldfish Have Been Recalled By Pepperidge Farm

Quick, cease your snacking! Pepperidge Farm recalled four different kinds of Goldfish crackers due to a potential salmonella threat. You know the ones: they're crunchy, salty, and your toddler probably can't get enough of them. Fortunately, not all Goldfish snacks have been recalled. Here's the low down on the recall to help make your snack run a little easier — and safer.

Pepperidge Farms announced the recall on Monday evening, citing a risk of salmonella, according to ABC 7 Chicago. The statement issued by the company on its website explained that the risk was due to the use of a seasoning containing whey powder. Four varieties of Goldfish crackers contain the seasoning. They include Flavor Blasted Xtra Cheddar, Flavor Blasted Sour Cream & Onion, Goldfish Baked with Whole Grain Xtra Cheddar, and Goldfish Mix Xtra Cheddar + Pretzel.

“Pepperidge Farm initiated an investigation and, out of an abundance of caution, is voluntarily recalling four varieties of Goldfish crackers,” the statement reads. “The products were distributed throughout the United States. No illnesses have been reported. No other Pepperidge Farm products in the U.S. are subject to this recall.”

If you have purchased any of these products, Pepperidge Farms recommends that you not consume them. Rather, you should return them for a full refund by applying for a reimbursement via the Pepperidge Farm website, as People reported.

This recall comes shortly after two types of Ritz crackers were recalled for a similar Salmonella risk. According to The New York Times, the company behind Ritz, Mondelez International, recalled several products due to whey powder. As with the Goldfish cracker recall, no cases of illness have been reported as of yet and the recall is limited to the United States, including Puerto Rico and the U.S. Virgin Islands, the Times reported. ac

Mondelez spokesperson Kimberly Fontes told the Times in the email that the recall is for the sake of caution. “We are taking this step as a voluntary, precautionary measure,” she said. Included in the recall are popular products such as Ritz Bits Cheese, Ritz cheese cracker sandwiches and Ritz bacon cracker sandwiches. Mondelez provided a full list of recalled products online.

Other recent sources of salmonella include pre-cut melon slices in June from stores like Walmart, Kroger, Jay C and Payless stores, according to CNN. In that case, the CDC advised retailers not to serve or sell pre-cut melon products that were distributed by SpartanNash Distribution, Caito Foods Distribution, and Gordon Food Service.

Each year, salmonella causes roughly 1.2 million illnesses, 23,000 hospitalizations, and 450 deaths in the United States every year, according to the Centers for Disease Control, with food being the leading source of illnesses — causing one million illnesses annually. Common symptoms of Salmonella include diarrhea, fever, and abdominal cramps that begin 12 to 72 hours after infection. Most people are sick from four to seven days and do not need medical treatment, the CDC reported.

Children are at the highest risk of developing salmonella, according to Kids Health, with one third of those infected being kids age four or younger. Symptoms in children are the same as those in adults, but dehydration from diarrhea in children can be more dangerous than in adults. Additionally, very young children and babies who contract salmonella may be treated with antibiotics, so Kids Health recommended that parents seek medical treatment for their children if they suspect they may have contracted the disease.

Food recalls are an important measure in food safety. Knowing which snacks may pose a risk helps parents to choose the best possible foods for their family. Happy snacking!