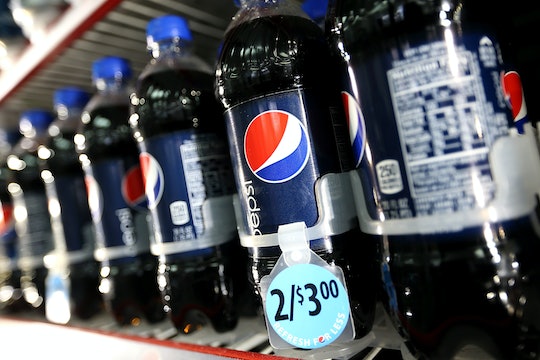 Pepsi Will Cut The Amount Of Sugar In Its Sodas, & It's A Small Step Forward

It's no secret that soda, no matter how tasty, has its downsides. For years nutritionists have advised us to reduce our consumption of what they call "empty calories," many of which are found in soft drinks. One well-known soft drink manufacturer is trying to meet health science and consumers halfway: Pepsi will cut the amount of sugar in its sodas — but will it actually help?

Sodas actually aren't the only drinks deemed too sugary: some juices and sports drinks have been indicated, too. Too much sugar has been linked to many health problems, like the development of Type II Diabetes. Sugary drinks can also increase a person's caloric intake without providing much nutrition, which is why they are sometimes referred to as "empty calories." Some studies have linked increased consumption of sugary drinks to the rise in obesity, partially because sodas tend to be high in calories: one can of regular Coke has 14o calories and 39 grams of sugar. But soda doesn't have any nutritional value and doesn't add much to a person's diet.

The World Health Organization recommends that adults consume no more than six teaspoons of sugar per day. 39 grams of sugar in a can of Coke is about nine and a half teaspoons.

Pepsi Co. (arguably Coca-Cola's biggest competitor) has decided that it will commit to reducing the amount of sugar in its drinks (which includes Gatorade, Pepsi, Mountain Dew, and Tropicana, among others). Last year, Pepsi tried to take artificial sweetener aspartame out of its drinks, too — but eventually started adding it back in to some of its products (because Splenda just wasn't cutting it on taste) after sales dropped.

Pepsi's new goal is to have two-thirds of its single serving drinks be less than 100 calories by 2025. This came in response to the WHO's recommendations and consumers increased attention to sugar intake. Earlier this year, the trade publication Beverage Digest found that soda consumption in the U.S. was at an all-time low, in part, it said, because there are so many alternatives to soft drinks on the market now. Paired with consumers tilt toward health, soda sales are down — even for the "diet" brands, which use artificial sweeteners, like aspartame, that consumers have become wary of.

Along with reducing sugar content, the corporation said it wants to also reduce saturated fat and sodium content in its products, according to CNN Money. The corporation's food product division, Frito-Lay, brings us products like Fritos and Doritos. Pepsi Co. is also aiming to stay environmentally friendly and promote sustainability; built into this plan is a promise to reduce its greenhouse gas emissions by 20 percent by 2030.

Chairman and CEO of Pepsi, Indra Nooyi, told CNBC that the reduction in sugar is partly possible due to technological advances:

Technology breakthroughs right now are resulting in better-tasting colas, almost as good as the full-sugar colas, but with lower calories. So we're now faced with [an] interesting opportunity to step the consumer down to lower sweetness levels.

While Pepsi's commitment to reducing the sugar content in its product shows the brand is aware of what consumers want, will it actually help reduce the health risks associated with sugar in the population?

Sugar is everywhere, and in high quantities that you might not even be aware of. Popular low-fat and "diet" varieties of snack foods, purported to be healthier, can actually have a lot of sugar — sometimes the same amount of sugar as in the "original" product.

The only sugars you don't have to worry about reducing? Those that naturally occur in fruits and vegetables, as well as the type of sugar found in milk. The WHO reports that consumption of these natural sugars does not contribute to the adverse outcomes associated with consuming sugars found in processed foods.

Why is that? Because the sugars are all different and handled by our bodies in different ways. To make it really simple: fructose, which occurs naturally in fruit, is directly absorbed by our bloodstream. Lactose, which is in milk, has to be broken down into lactase before our bloodstream can absorb it. It's usually not a problem for people unless they are lactose intolerant, which means their digestive system doesn't have the enzyme it needs to break down the sugar's bonds.

Glucose, found in carbohydrates, requires our body to produce insulin to help digest it. Our bodies need glucose to function properly, but too much of it can stress out our system as it tries to maintain the level of glucose in our blood through that production of insulin (called "blood sugar" sometimes). Sucrose, a combination of fructose and glucose, is often found in dried fruit. It can only be used by the body when the fructose has been converted into glucose through a biochemical process in your liver. So, too much sucrose in your diet makes your liver have to work pretty hard.

Even if Pepsi reduces the sugar in its products, unless a lot of other companies get on board and commit to reducing sugar content in theirs, we've still got a long way to go in reducing our sugar consumption.