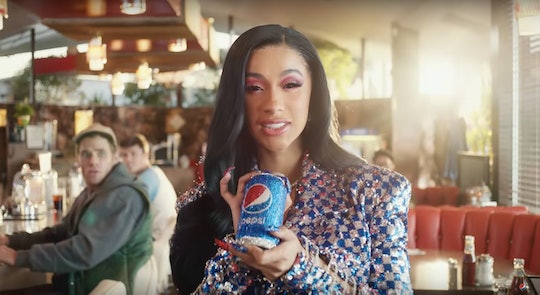 Pepsi's 2019 Super Bowl Commercial Will Have You Saying "Okurr!"

For those of us who are less interested in sports than some, the commercials are arguably the best part of the Super Bowl. And one brand that has delivered quality commercials for decades is Pepsi. From Britney Spears popping a can, to Cindy Crawford gulping some down, big names have signed on to promote the popular soft drink. And Pepsi's Super Bowl commercial for the 2019 game is no different. After weeks of teaser clips, Pepsi finally released the full commercial this week, and it did not disappoint.

Cardi B, Steve Carell, and Lil Jon walk into a diner — and don't worry, I'm not about to tell you a bad joke. The three stars are here to OK, okurr, and OH-KAY choosing Pepsi over Coca-Cola in the new commercial, as E! News reported.

The ad begins when a woman is ordering from a waitress in a diner. "Is Pepsi OK?" the waitress asks, alluding to the common question that comes before the disappointing reality of a restaurant without coke. But before the customer can answer, Carell pops up to say, "Is Pepsi OK? Is Pepsi OK?! Oh! Are puppies OK? Is a shooting star OK? Is the laughter of a small child OK?" But don't take his word for it.

As it turns out, Pepsi is more than OK. According to The Fader, Carell then points to Lil Jon who declares that Pepsi is OH-KAY, and then Cardi B walks in to let everyone know all is "okurr!"

Along with being quite clever, the ad is also extremely pricey. According to CNBC, the 2019 Super Bowl host network, CBS, is charging $5.25 million for a 30-second spot on game day. That breaks down to about $175,000 per second, okurr!

But you won't catch Pepsi execs blinking an eye at the big number. As one of Super Bowl 53's biggest sponsors, Pepsi is advertising beyond just your TV set; the brand has set out to paint Atlanta — which is the home of Coca-Cola, I might add — blue for the occasion, as CNN reported.

Pepsi has put up over 350 ads on billboards, recycling bins, and even the walls of train stations around Atlanta. And they're not just costly and wide spread, the ads are a bit snarky to boot. According to CNN, a billboard near The World of Coca-Cola museum reads "Pepsi in Atlanta. How Refreshing." Another says, "Hey Atlanta, Thanks For Hosting. We'll Bring The Drinks."

Greg Lyons, chief marketing officer for Pepsi Beverages North America told CNN that the numerous advertisements are "a big spend for us," and they're not holding back. "We are absolutely leaning in to make sure that we are painting Atlanta blue during the Super Bowl," Lyons told CNN.

For those of you not local to Atlanta, Twitter has collected some of the best ads for you to check out wherever you are. Subtle they are not!

If you're wondering how Coca-Cola is handling the heat, the company seems to be taking the high road. "As Atlanta's hometown beverage company for more than 130 years, we're thrilled to help our city welcome everyone to town for the Big Game, including our friends from Pepsi," a representative for Coca-Cola told CNN. There is certainly something to be said about southern hospitality.

I'm not sure who will have a bigger showdown on Sunday: the New England Patriots and the Los Angeles Rams, or Pepsi and Coca-Cola. Either way, viewers are in for one heck of a game.