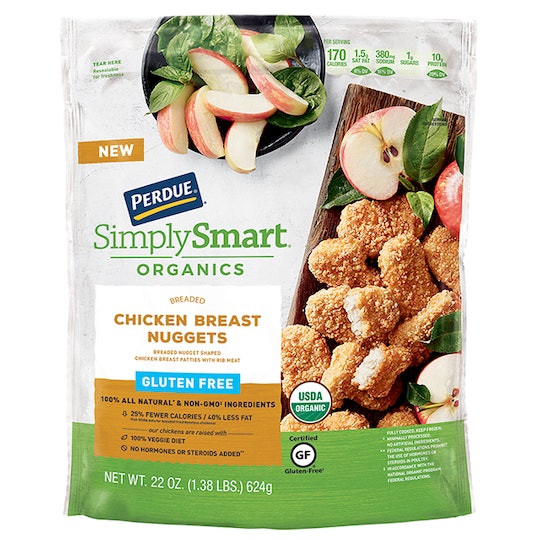 Check Your Fridge: Over 60,000 Pounds Of Chicken Nuggets Were Just Recalled

Chicken nuggets might be a household staple for those with young children, but on Thursday the United States Department of Agriculture's Food Safety and Inspection Service confirmed a "possible foreign matter contamination" issue in Purdue chicken nuggets after customers complained about finding wood in their food. As a result, Perdue Foods is recalling its gluten free chicken nuggets, according to CNN, and it's definitely something you'll want to be aware of.

Perdue didn't immediately return Romper's request for comment on the matter, but in a post on the brand's website, the company announced it "has voluntarily recalled 68,244 pounds or approximately 49,632 bags of frozen, fully cooked organic gluten free chicken breast nuggets," specifically those manufactured for its Perdue Simply Smart Organics brand.

To properly identify if your Perdue nuggets are included in the recall, look for the "best by" date, along with the UPC code listed on the package. Recalled gluten free chicken breast nuggets would have been produced in Oct. 2018, and will have a best by date of Oct. 25, 2019. If your nuggets are a match, double check the UPC number on the bar code: recalled chicken will have 72745-80656 as the product bar code, along with an "establishment number" or "plant code" of P-33944, found on the front of the package, in the bottom right-hand corner.

If you can't locate that information or confirm whether or not your bag of nuggets are in the clear, you might want to get rid of them just to be safe.

According to the USDA, the recall came about following three consumer complaints about wood found in the nuggets, though thankfully there have not been any confirmed reports of anyone becoming ill as a result. Despite that though, the FSIS has classified the recall as Class I with a "high" health risk, meaning that "there is a reasonable probability that the use of the product will cause serious, adverse health consequences or death."

As a result, anyone who has purchased Perdue SimplySmart Organics Gluten Free Chicken Breast Nuggets is encouraged to avoid eating them, and to instead either throw them away, or return the product to the store where it was purchased. Alternatively, the company has noted that consumers can also contact Perdue Foods directly at 877-727-3447 to receive a full refund.

Despite the recall, Perdue said on its website that the company has performed "a thorough investigation," into the complaints, and that they now believe "only a minimal amount of [the recalled] packages has the potential to contain pieces of wood." In other words, it's unlikely that anyone will become seriously ill now that the recall has been announced, though it's still important to double check your freezer and throw out any products affected, just in case.

Whether or not the Perdue recall affects you though, it may feel like there's a new food recall happening all the time. And, well, you wouldn't exactly be wrong: a new report published by the U.S. Public Interest Research Group (PIRG) found that, actually, the number of food recalls is higher now than it was five years ago, according to USA TODAY. Compared to 2013, for example, there were 10 percent more food recalls in 2018 — though the highest year was actually 2016, when 905 food recalls were issued.

The most likely products to be recalled during the five-year period? Poultry, followed by beef and pork.

Let's be honest: nobody likes to stop and think that there could possibly be anything wrong with the food they buy at the supermarket, and hearing about all these recalls can definitely be worrisome. But ultimately, it's a good idea to pay attention to food recalls just in case. While it might not always be possible to entirely prevent people from getting ill or from finding wood in their chicken nuggets (as disheartening as that reality is), it is at least possible to limit the risk by ensuring potentially-dangerous products aren't being kept and consumed due to lack of awareness.