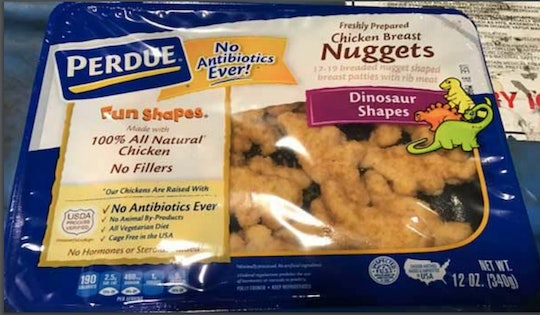 Perdue Is Recalling About 16,000 Pounds Of These Dino-Shaped Chicken Nuggets

On Monday, Jan. 28, the U.S. Department of Agriculture (USDA) announced a recall on one of your child's favorite foods — chicken nuggets. According to the USDA's notice, Purdue is recalling just over 16,000 pounds of kids' chicken nuggets due to "undeclared allergens" and other misrepresentations of ingredients.

Any time a recall is issued on food, it's best practice to dispose of any product you have that could be affected. In this case, Perdue is recalling the products because the chicken nuggets contain milk, something the USDA calls a "known allergen," and it's not declared on the product label.

Although Purdue did not immediately respond to Romper's request for further comment regarding the recall, the company did issue a statement saying that, fortunately, "there have been no reports of adverse reaction or illness associated with this product."

"Out of an abundance of caution for our consumers we have decided to recall these items that were sold in the refrigerated case," Jeff Shaw, Perdue’s Vice President for Quality Assurance, said in the statement.

The company also said that if you have any affected products, you should contact Perdue Foods at 866-866-3703 for a full refund.

Though there are various ways that product issues — especially regarding food and other consumable items — are discovered, and unfortunately sometimes involve one or many people contracting an illness from them, that was not yet the case with the Purdue nuggets. Rather, the mislabel was discovered by a retail store, as CBS News affiliate WTRV reported.

“The problem was discovered when a retail store notified the company of an incorrect label,” the USDA said in its recall notice. “The establishment investigated and determined that the incorrect back label was applied to the product. There have been no confirmed reports of adverse reactions due to consumption of these products. Anyone concerned about an injury or illness should contact a healthcare provider.”

The UDSA is defining the recall as Class I, which is the highest — and most dangerous — that the agency issues. According to its website, classes go as follows, Class I indicates that "this is a health hazard situation where there is a reasonable probability that the use of the product will cause serious, adverse health consequences or death."

This recall comes just a week after Purdue issued another recall on chicken nuggets for potentially containing wood pieces, according to CBS News.

To ensure that you and your family remain safe, it's always a good idea to take recalls seriously, and to see whether or not you can return the affected products and get your money back. If you or someone in your family has an allergen or sensitivity to any milk products, it's best to proceed on the side of caution, and be sure to check whether or not anything in your freezer or fridge could be affected.