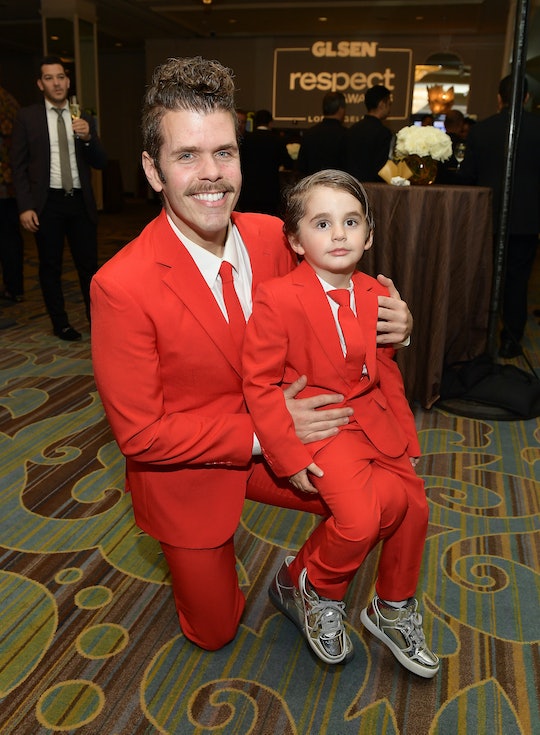 Perez Hilton, whose real name is Mario Lavandeira, is no stranger to causing controversy. From Lavandeira's numerous celebrity feuds to his *strong* opinions, it's hard to argue against his knack for generating headlines. But just when you thought the celebrity blogger couldn't get any more controversial, Lavandeira upped the ante on March 27 when he brought his 5-year-old son, Mario Lavandeira III, into a hot-topic debate about sexuality. To sum up the drama, people are upset that Perez Hilton said he would prefer if his son wasn't gay. Not only do some people think Lavandeira's remarks are homophobic, but some fans are upset because his comments seem to imply that being gay is a choice. Lavandeira's publicist did not immediately respond to Romper’s request for comment.

As a gay man himself, Lavandeira often speaks out on LGBTQIA+ issues. So, it's really no surprise that he decided to give his two cents on the idea of Mario possibly being gay. Although Lavandeira didn't make any definitive remarks about Mario's sexuality at the moment, he did express a desire for his son to be heterosexual. “This might get me in trouble, [but] I purposefully would not put my son in dance class, because dance class might make your kid gay," Lavandeira stated during an episode of his podcast, The Perez Hilton Podcast With Chris Booker, according to HuffPost. "I would prefer if my son was heterosexual. If I had to choose, I would be heterosexual, too. It would be easier. I’ve said that before.”

Although there's a lot to dissect in Lavandeira's statement, it's the part about him not wanting to enroll Mario in dance class because it might "make" him gay that has most people up in arms. For starters, many fans are outraged that Lavandeira is supposedly suggesting that certain activities or situations can make a person gay.

“First of all, you can’t really 'end up being' a sexuality, it’s your orientation," one person wrote, according to Twitter. "Second of all, dancing does not and cannot magically make someone like the same sex, it just doesn’t make sense."

Another person added: "Either your son is gay or he’s not or he’s anything in between but a dance class won’t change anything about it? How delusional is that guy?"

What these comments seem to reject is Lavandeira's supposed insinuation that that sexuality is something you choose or that you can switch on or off like a light switch — a sentiment that many people (and researchers) disagree with.

"People make me sick by saying it’s a choice to be gay lesbian or bisexual or other ways," an outrage user on Twitter penned. "It’s not a choice it’s how you were born to be actually. Nothing to do with dancing or stuff like that!"

Following all the backlash, Lavandeira took to YouTube on Sunday to further elaborate on his initial comments. And while Lavandeira emphasized in the vid that he isn't ashamed of his sexuality — he didn't back down on his admission about wanting Mario to be heterosexual.

Lavandeira stated, according to HuffPost:

If I had my preference, I would prefer my son to be heterosexual because that’s easier. As a gay man, I’m not ashamed of being gay, but if I could go back in time and when I was 18, be given a choice ... I would’ve chosen, then, to be heterosexual ... Being a gay man, or even a gay woman or a transgender man or a transgender woman in America and around the world is still a harder road to travel on. We are still discriminated against, and I don’t want my son [or daughters Mia, 2, and Mayte, 5 months] to have a harder path in life.

Of course, there's nothing wrong about wanting your kid to avoid hardships in life. Not to mention, it's true that the LGBTQIA+ community continues to face a frightening number of hate crimes and discriminatory policies despite the fact that it's 2018. And as a gay person myself, I can admit to seeing his perspective on this issue. Still, like many other people out there, I don't agree with Lavandeira's stance. To put it simply, why does life have to be more difficult for LGBTQIA+ people? Isn't this society's problem to fix? Why does the LGBTQIA+ community have to suffer for the failings of others?

"A. You can't catch gay B. Instead of wanting a straight son how bout working for a less homophobic society," one person pointed out. "You've literally identified the problem & offered no solution C. You can't make your son gay or straight; he is what he is and all will reveal itself in time."

Another fan stated: "I understand what he meant, but that's like saying 'I'd rather my kid not be black to have a stress free, discrimination free life.' See how bad it sounds when you replace gay with something else?"

Despite all the arguments against Lavandeira's take, however, there are plenty of people who support his view.

"It is harder when your a gay person," one fan admitted. "I always said the same thing. I would rather my kids not be but if they are then I would love them unconditionally and I’m lucky to have a family that will love them also."

Another person chimed in: "Understood. Being gay is hard. A life of persecution over who you love by close minded bigots. No parent would want that for their child."

As for Lavandeira, he said he's a "work-in-progress."

No matter how much we evolve we always carry our past with us. I'm an out and proud gay dad of three who grew up in a machista and homophobic Latino community in Miami in the '80s and '90s and I went to an all-boy Jesuit school. It was hard. I'm a work-in-progress. Aren't we all?

And no matter where your opinion may fall on the issues Lavandeira brought up, I think most people can agree that these are conversations worth having. Hopefully, all of these discussions will lead to a better understanding of sexuality and the LGBTQIA+ community.