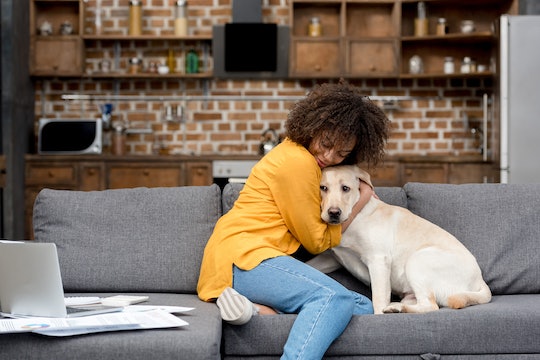 Owning a lovably, cuddly pet can unquestionably make one's home life better — and apparently, it can affect pet owners' professional lives as well. In fact, according to a new survey, people who have owned pets may be more professionally successful, and this is definitely good news for ambitious pet parents.

The survey was conducted by Kelton Global Research for Banfield Pet Hospital, according to Fast Company. The researchers surveyed 857 adults in the United States with a variety of careers, as explained in the survey summary on Banfield's website.

So, how exactly does pet ownership cause career success? Well, according to Banfield's research, executives reported that their pet helped teach them lessons like responsibility, creativity, empathy, discipline, and organization, which have all been invaluable in the business world.

“At Banfield Pet Hospital, we’ve long recognized the special bond between people and their pets, as well as the positive impact pets have on our society,” Brian Garish, president of Banfield Pet Hospital, said in a statement on Banfield's website. “From the pet ownership lessons we learned as children, to the ways our four-legged friends currently help us evolve, connect with others, and stay grounded, our latest research supports the notion we’ve had all along – that there may be a link between pets and their ability to help shape us as people.”

But what about people who grew up pet-less, but have adopted pets as adults? Luckily for those, the survey showed that current pet ownership can also help with professional success.

According to the research, 86 percent of current pet parents surveyed said owning pets helps them stick to a routine, better manage their time, and more efficiently multitask. But even if you don't think your pet has directly helped you, your coworkers' knowledge that you have a pet may actually be beneficial for your career. In fact, 80 percent of people surveyed said they "feel more connected to colleagues who are pet owners," and 79 percent of those surveyed believe that fellow co-workers who have pets are "hard workers."

Now, if you're struggling to get that promotion, or if you keep butting heads with your animal-loving boss, don't just adopt a pet willy-nilly. Being a pet parent is hard work — especially if you're juggling it with a full-time job — so make sure you are 100 percent ready before bringing an animal into your home. Not to mention, 77 percent of C-suite executives surveyed reported that they have brainstormed business ideas while walking their dog — so if you don't have time to commit to your very own furry friend, maybe start out by volunteering to walk dogs at a shelter. You never know, it could be where you come up with your best business idea yet!