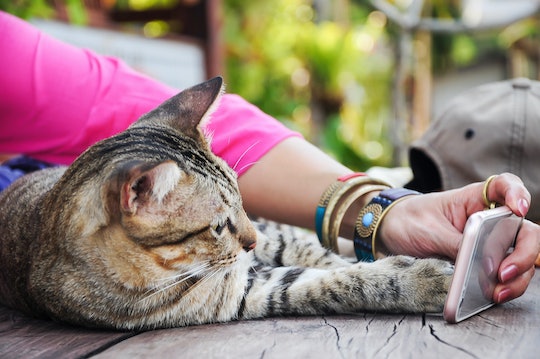 iPhone 11's New Portrait Mode Will Make Photos Of Your Furry Friend So. Much. Better.

The iPhone just keeps on getting better. On Tuesday, Sept. 10, the two latest models of the iPhone — iPhone 11 Pro and iPhone 11 Pro Max — were introduced to the world. The phones come with a bunch of exciting features that would convince anyone they need a new phone. Don't panic, but pet portrait mode is coming to Apple's new iPhone so you can properly photograph your furry friend and capture all their glory on camera.

Everyone takes photos with their iPhone — myself included. I have more than 9,000 photos on my iPhone at the moment, and a good chunk of those photos are devoted to pictures of dogs. I can't help it. Those puppers and doggos are the cutest things around, and seeing photos of them makes my heart so happy. But taking photos of dogs is now going to be a lot better with the two new iPhone models, which are available for pre-order on Friday, Sept. 13, and will be released in stores a week later on Sept. 20.

The new iPhones will now be able to detect objects and pets in portrait mode, according to Mac Rumors. With older iPhone models like the iPhone XR, portrait mode is only able to detect human faces, not objects or pets. But with these new phones, portrait mode can be used on dogs, cats, or even your pet parakeet, allowing anyone to take stunning, clear shots of their animals with their phone.

If you ever wanted to get a professional level shot of your favorite pet, now is the perfect opportunity to do it yourself. The photos taken with the iPhone 11 Pro and Pro Max look absolutely incredible.

Users will be able to choose from six different lighting options in portrait mode with the new iPhone, according to Mac Rumors, allowing users to get a professional level shot, thanks to the depth of field features. And pets aren't the only subject worth shooting with the mode's new improvements. Portrait mode will also work with shooting your friends, family members, and those rambunctious toddlers that are so hard to get a photo of.

While portrait mode has always been a favorite feature for iPhone users, people are going to be very excited to take any photo with the new iPhone models. Users will be allowed to take photos in low lighting, take better selfies (including something called a "slofie" or a slow motion selfie), and take clearer, crisper photos all with their camera app.

Needless to say, Twitter users are amped. Especially since it means they will be able to take better photos of their pets.

If that wasn't exciting enough, the technological side of things makes it even better. The new phones will come equipped with two or three camera lenses (depending on the size of the phone), according to TechCrunch, which all serve different roles to make photos even better. The phones will also shoot the widest iPhone photos yet, allowing users to capture four times as much in the frame compared to a normal iPhone photo, according to Apple.

Whether you're an aspiring photographer or just really like to take photos of your furry friends, the new iPhones' features will make everyone's social media feeds full of quality content.