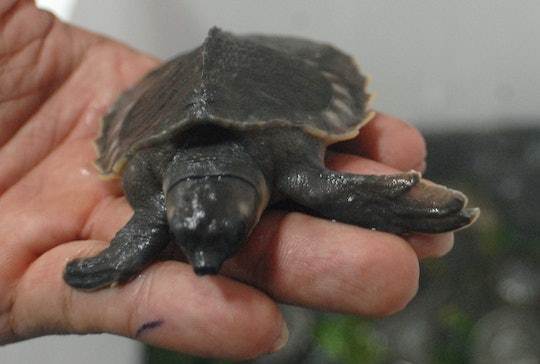 Lock up your pizza and hide your skateboards, because the turtles are on a rampage. And while they're thankfully not trained in ninjutsu or armed with katanas, they are capable of causing some severe intestinal distress, which is… also bad. TIME has reported that the Centers for Disease Control is investigating a multi-state salmonella outbreak caused by pet turtles. There's no evidence that the turtles are mutants, but according to the CDC, they have a long life expectancy, so it's entirely possible that they're teenaged.

Between March and August, 37 Salmonella Agbeni infections were reported across 13 states, according to the CDC's advisory. No deaths have been reported, but 16 people have been hospitalized as a result. About one-third of the infected people were children under 5 years old. The sale of turtles with shells less than four inches long has been illegal in the United States since 1975, because they're so likely to transmit salmonella. Genome sequencing of the bacteria, as well as patient interviews, have helped the CDC determine that the outbreak originated through small turtles sold by street vendors. As a general rule of thumb, consumers should avoid purchasing live animals from any source other than reputable pet stores.

Salmonella usually isn't too serious; according to the CDC, it can cause diarrhea, fever, and abdominal cramps that last about 4 to 7 days, and most people don't even require treatment. However, some patients can experience diarrhea that's so severe, they to be hospitalized. A serious salmonella infection can spread to the bloodstream and cause death without antibiotic treatment, and some patients can develop reactive arthritis, eye irritation, and painful urination.

To avoid salmonella infection, the CDC recommends avoiding contact with turtles and their habitats. If you do handle a turtle, wash your hands well. Children under 5, adults older than 65, and people with weakened immune systems should not keep turtles in their homes. And this may seem obvious, but the CDC specifically warns against allowing turtles to "roam freely in the home," bathing turtles in kitchen sinks, or handling a turtle and an infant at the same time. When this would actually come up, I couldn't say. I don't know your life. Finally, and this is going to be a tough one for some, don’t kiss or snuggle with your turtle. That means you, April O’Neil. I'm so sorry, but it's for your own good. Stay safe out there.