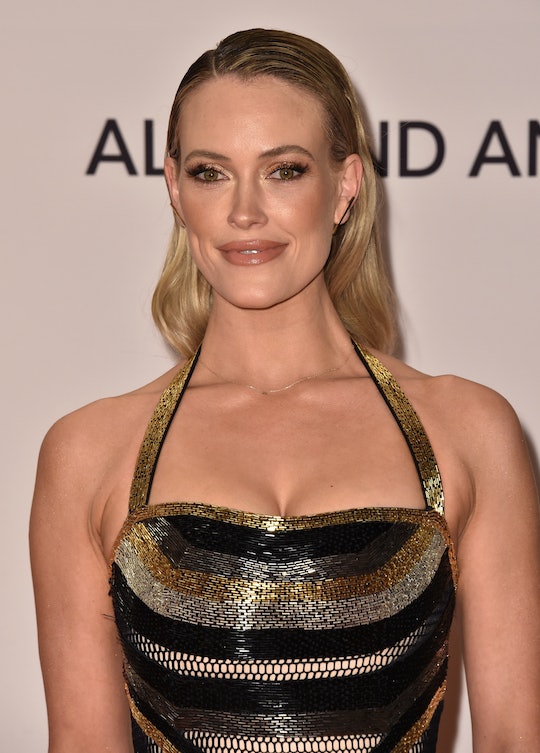 Every once in awhile, celebrity parents will gift the world with a video or a photo that's just incredibly relatable. Not only can every parent sympathize with them, but these little moments also give us mere mortals a glimpse into their everyday lives. And it doesn't hurt that celebs sharing updates of their kids also has a tendency to make you smile. So is the case with Peta Murgatroyd's son discovering childproofed drawers, because yeah, it might just make your day.

Murgatroyd, who is the mom of 9-month-old Shai Aleksander, uploaded a video to her Instagram of little Shai walking through their kitchen, attempting to open up all the drawers. From the looks of it, it seems as though Shai was pretty used to being able to open up the drawers in the kitchen and have some real fun. But, unfortunately, his mom, Murgatroyd, and dad, Maksim Chmerkovskiy were one step ahead of him. Because even though his parents might be dancing champions, little Shai stumbling through his kitchen isn't the most coordinated thing in the world. But it definitely might be one of the cutest.

"Someone help him...the drawers now don't open," Murgatroyd captioned the video, explaining that her childproofing process "has begun ...to be continued." And clearly, little Shai is extremely confused as he goes around, from drawer to drawer, exclaiming in a high-pitched scream when he begins to discover that they just won't open.

But it doesn't stop there. Shai then goes on to try and open the oven, which is also locked shut, and it's at that point that he starts to get a little...testy. Once Shai starts to get really upset about having his entertaining drawers cut off from him, he starts screaming even louder. So much so, that his mom had to tell him, "Shai, stop yelling, it's getting late," and then joked that "someone's having a tantrum," when he just wouldn't stop.

But honestly, who could blame him? Change is hard, Shai, I get it. And clearly, those drawers really meant something to him. He may just be 9 months old, but clearly Shai knows what makes him happy. And what makes him happy? Opening kitchen drawers, of course.

Seriously, though, while it is a little sad to see Shai so distraught over the pain childproofing has caused him, it's also incredibly adorable to hear his little squeals and giggles. And, hopefully, Shai will find something else that makes him as happy as those drawers did. Maybe watching his parents dance on TV? The professional dancers of Dancing With The Stars are clearly in love with little Shai, as they both post pretty regular photos of the little babe. And who could blame them? He's just about as sweet as it can get.

And as if Shai wasn't already cute enough, Murgatroyd also told Entertainment Tonight that he's pretty smart, too. "While we danced last week," she explained, "my nanny actually said that yeah, he recognized me on TV."

So, clearly, baby Shai has a few things going for him, other than that perfect little laugh and scream. And with parents as loving as his, who can be shocked by that? When Shai was born, Murgatroyd and Chmerkovskiy told People, "This is, without a doubt, the best thing that has ever happened to us!" So, even though Shai might be a little upset that his favorite activity is no longer a viable option, I'm thinking he's going to be just fine.