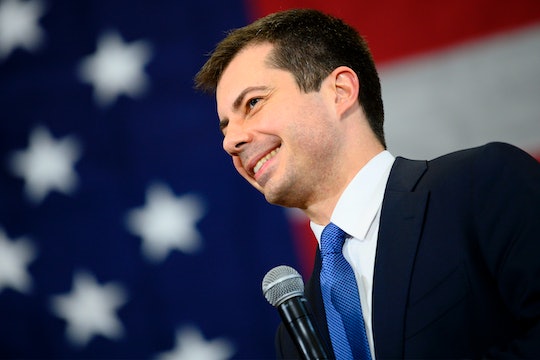 Between COVID-19, murder hornets, and Pentagon-released UFO videos, 2020 has been really weird. So it's perhaps not too surprising that one of this week's viral news stories actually happened in 2019. Thanks to the upcoming presidential election and the nomination of Amy Coney Barrett to the Supreme Court, debate around reproductive rights and abortion access have been cast into the national spotlight once again. As a result, abortion comments Pete Buttigieg made during a Fox News town hall in 2019 have resurfaced, with many hailing them as the perfect response to questions regarding term limits on abortion.

"I think the dialogue has gotten so caught up on when you draw the line that we've gotten away from the fundamental question of who gets to draw the line," the former Democratic presidential candidate told Fox News' Chris Wallace in May 2019 after being asked if, "at any point in pregnancy," there should be a "limit on a woman's right to an abortion."

"I trust women to draw the line when it's their own health," Buttigieg continued.

"Just to be clear, you're saying that you would be ok with a woman well into the third trimester deciding to abort her pregnancy?" Wallace pressed. It was a line of questioning conservatives had increasingly begun to use in an effort to fuel outrage over Democrats' support for abortion access — a point not lost on Buttigieg.

"Look, these hypotheticals are usually set up in order to provoke a strong emotional [reaction]," the former mayor of South Bend, Indiana, said.

However, when Wallace attempted to argue his question wasn't built around a hypothetical as "there are 6,000 women a year who get abortions in the third trimester," Buttigieg was quick to put that number into context for the audience.

"That's right, representing less than 1% of cases," Buttigieg said before asking Wallace — and the audience — to put themselves into the shoes of a woman in that situation.

"If it's that late in your pregnancy, that means almost by definition, you've been expecting to carry it to term," Buttigieg said. "We're talking about women who have perhaps chosen a name, women who have purchased a crib, families that then get the most devastating medical news of their lifetime, something about the health or the life of the mother that forces them to make an impossible, unthinkable choice."

Buttigieg was also correct in his assertion that abortions performed in the third trimester or late in the second trimester tend to be a result of a serious medical complication. According to the American College of Gynecology (ACOG), common reasons for an abortion to be performed after 21 weeks include situations that may severely threaten the mother's health, including severe preeclampsia, bleeding due to placenta previa, placental abruption, placenta accreta, and premature membrane rupture and infection. A fetal malformation or genetic anomaly diagnosis such as absence of the brain and cranium or limb-body wall complex, which sees organs develop outside of the body cavity, can also lead to an abortion in the second or third trimester, according to ACOG.

More than a year after Buttigieg appeared at Fox News' 2019 town hall, his comments on abortion have gained serious traction on Twitter. "[Buttigieg] is not just a rising political star, but a genuine, empathetic, and brilliant human being," actor Ed Helms tweeted. "This one of the most insightful, articulate and compassionate takes one could ever hope to hear on the difficult issue of abortion."

Others characterized Buttigieg's response as "an incredibly effective and empathetic answer" or noted simply that it was "well said" and "should be repeated and mainstreamed."

As Buttigieg put it during Fox News' 2019 town hall, "The bottom line is, as horrible as that choice is, that woman, that family may seek spiritual guidance, they may seek medical guidance, but that decision is not going to be made any better, medically or morally, because the government is dictating how that decision should be made."