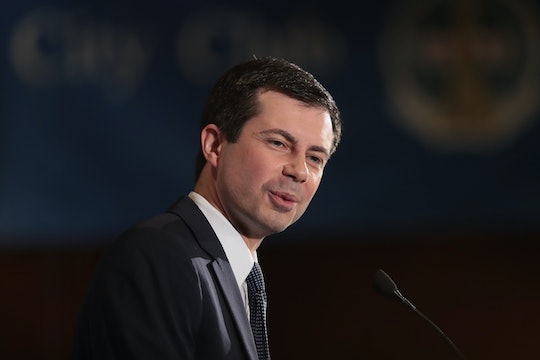 At a town hall in Iowa City on May 18, Democratic 2020 presidential hopeful Pete Buttigieg gave advice on bullying to an 11-year-old girl who happens to be struggling with this all too common issue. Not only was Buttigieg's response inspirational, but it also magnifies the many differences between the candidate and his potential Republican opponent, President Donald Trump.

Sadly, more than one out of every five (20.8 percent) students report being bullied, according to a 2016 report from the National Center for Educational Statistics. And this unfortunate stat was reiterated at Buttigieg's town hall on Saturday when an 11-year-old named Rebecca Johanns asked the South Bend, Indiana mayor for advice regarding how to best deal with bullies, as ABC News reported.

Before diving into his own advice, Buttigieg first commended Rebecca for speaking out. "Part of the advice I’d give is to be willing to talk about it. So I think you’re leading the way on that," he said, according to the the Des Moines Register.

The candidate then admitted that he has been the recipient of bullying too, stating, according to HuffPost: "Everybody who’s different can be bullied, and the secret is everybody’s different in some way."

Although the politician didn't go into specifics, it's possible he was referring to his experiences coming out as a gay man. Buttigieg publicly opened up about his sexual orientation in June 2015, revealing that he struggled to find self-acceptance.

Buttigieg then shifted the conversation back to Rebecca, telling her that this situation doesn't reflect poorly on her own character. "You have nothing to be ashamed of," he reminded her.

Considering some kids feel like the bullying is their fault, this part of Buttigieg's speech is very important. No child, or adult for that matter, deserves to be demeaned in any way.

Buttigieg also had thoughts to share about the bully in this situation, stating, according to the Des Moines Register: "The person who’s bullying you probably has something a little broken in them. They want to kind of control a situation because something else in their life isn’t going well, and they don’t feel they have control in a bigger way."

When someone in the crowd yelled out, "sounds familiar," Buttigieg replied, according to The Daily Iowan: "I think it really matters that we have a president who doesn’t show that kind of behavior. It’s one of the reasons I’m running for president."

It's true that Buttigieg holds himself to a higher standard than Trump. If you Google Trump and the word "bully," you'll be treated to a ton of examples highlighting his antagonistic behavior. In fact, just over the weekend, he referred to Michigan Rep. Justin Amash as a "loser" on Twitter.

Clearly, Buttigieg is walking the talk here. Each and every time someone has lobbed an insult his way, he has kept the focus on his policies and vision for America in 2020. And while his advice might not work for everyone (bullying can be a complex issue with many layers), it's nice to see a presidential candidate handling the topic of bullying with thoughtfulness and sincerity.