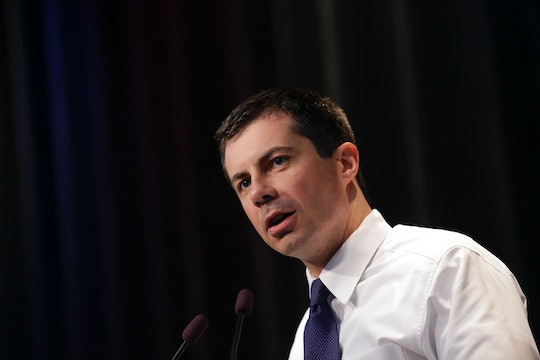 It's no secret that mental health care in the United States is seriously lacking. Mental health professionals can be inaccessible for a multitude of reasons, and as a result, those suffering with mental illness sometimes self-medicate with recreational drugs or die by suicide. Postpartum moms are no exception to this crisis despite the fact this group is often overlooked, which is one reason why Pete Buttigieg's plan for mental health care is garnering a lot of attention.

In recent years, a growing number of postpartum moms have died by suicide or drug overdose. A study, was published in the American Journal of Obstetrics and Gynecology in June, looked at maternal death one year after childbirth. It included more than 1 million women who delivered in California hospitals between 2010 and 2012. And what this study found was 300 of the moms had died, with suicide as the seventh leading cause. Similarly, a study published in 2013 by JAMA Psychiatry pointed to suicide as the second leading cause of death in postpartum women.

Additionally, between 14 to 30 percent of maternal deaths are caused by addiction in some parts of the U.S., according to recent estimates from Columbia University.

Clearly, new moms need more access to mental health services. This brings us to Pete Buttigieg's new mental healthcare plan, which was published on Aug. 23, according to CNN. In his plan, the Democratic presidential candidate hopes to prevent 1 million "deaths of despair" — deaths due to drugs, alcohol, and suicide — by 2028.

His lengthy plan aspires to make sure everyone has comprehensive coverage for mental health care and addiction services, and it would start by guaranteeing one free annual mental health checkup. "Our plan breaks down the barrier around mental health and builds up a sense of belonging that will help millions of suffering Americans heal," Buttigieg explained, according to Motherly.

This crisis is the result of years of neglect by our political leadership. Our health care system is so broken — and our approach to mental health and addiction care so fragmented and often punitive — that less than one in five people with a substance use disorder and two of every five people with a mental illness receive treatment ... To meet this urgent national challenge, we need a new approach to providing mental health care: one truly prepared to tackle this as the crisis it is, and one that understands the key driver of change will be based in strengthening our communities.

The Democratic presidential candidate also aims to tackle the stigma surrounding mental illness and to require "every school across the country to teach Mental Health First Aid courses."

Buttigieg's plan would help more than just moms, of course, because it isn't just mothers who are experiencing higher rates of mental illness and suicide. The presidential hopeful plans to spend $300 million on the plan, according to Motherly, a figure that's nothing to sneeze at.

Although Buttigieg's plan includes many great suggestions, America has a long way to go in supporting its citizens' mental health care needs adequately, especially when it comes to postpartum moms. But all long-lasting change has to start somewhere.

More Like This
What To Know About Your C-Section Shelf
Pinterest Predicts Their Top 2023 Trends In Parenting, Beauty, Fashion, Home, & More
Yes, It’s Possible To Get Pregnant If You Have An IUD
This Year's White House Holiday Decor Features Wooden Cutouts Of The Biden Family's Pets