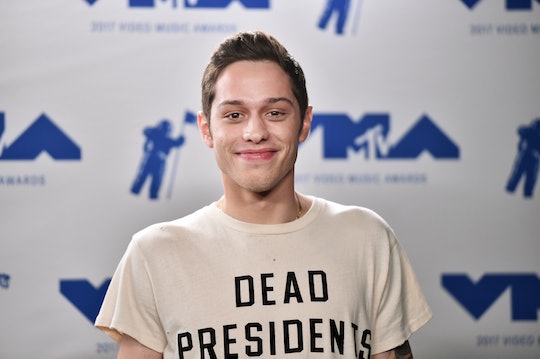 The unexpected relationship between Saturday Night Live comedian Pete Davidson and singer Ariana Grande has been a whirlwind of social media flirting turned engagement — and seemingly overnight. Of course, there's no way of knowing how long Davidson and Grande have known each other, or how long their relationship has really been going on. But most fans probably agree that Davidson "put a ring on it" at warp speed. Still, love doesn't necessarily follow a set timeline, and the couple seems incredibly happy together. And honestly, Pete Davidson's birthday message to Ariana Grande is pretty much the sweetest thing.

Us Weekly reported that in honor of the singer's 25th birthday on Tuesday, June 26, her new beau took to Instagram to mark the occasion. "Happy birthday to the most precious angel on earth!" Davidson wrote, alongside a photo of Grande riding piggy-back-style on his back while they recently visited Disneyland. "You’re my favorite person that ever existed :) i love you sm." Awwww! I don't care what you think about this young couple, "You're my favorite person that ever existed" is freaking adorable. And judging by the comments on this particular post, it seems plenty of Davidson's Instagram followers think so, too.

"You guys are the cutest," one follower commented.

"THIS IS SO PURE," another person declared.

Yet another follower wrote, "My heart is melting."

Another chimed in with, "You both are the definition of goals omg."

"This is the kinda love we all dream about!" another person commented.

And if that weren't enough, Davidson followed up this impossibly adorable message with another post, People reported. Along with a photo of the couple embracing, Davison wrote, "One more for the queen. words can’t express what a real f*cking treasure this one is."

What makes the Davidson-Grande whirlwind relationship especially interesting is they were both dating other people less than two months ago, Cosmopolitan reported. On May 10, Grande revealed that she and her boyfriend Mac Miller had ended their relationship. And on May 16, Davidson publicly announced that he and his girlfriend, Cazzie David, had split. Could Grande's guest-hosting gig on SNL in March, 2016, have sparked something?

Davidson and Grande publicly confirmed their relationship on May 30 with a Harry Potter-inspired post on Instagram, Elle reported. This sweet shot followed roughly two weeks of rumors they were dating. "The chamber of secrets has been opened ..." Davidson wrote next to a photo of himself rocking a Gryffindor cloak and Grande wearing a Slytherin cloak.

Less than two weeks later — on June 11 — outlets began reporting that the couple was engaged. Photos of Grande wearing what appeared to be an engagement ring surfaced, and the singer seemed to confirm the rumors on Twitter. Finally on June 20, Davidson himself confirmed his engagement to Grande while on the Tonight Show Starring Jimmy Fallon, People reported. “I feel like I won a contest, so sick,” he said. “It’s f*cking lit, Jimmy. It’s so lit.”

“It’s so funny to walk down the street because dudes are walking by,” he explained, while mimicking them tipping their hats at him. “Did you see that Derek Jeter commercial? He’s retiring and everybody tips their hat.” Davidson continued:

Some dude goes up to me and says, ‘Yo man, you gave me hope.’ I was like I didn’t know I was that ugly.

As hard as fans and media outlets try to piece together Pete Davidson and Ariana Grande's relationship timeline, I have a feeling we won't know when it began for sure unless they spill the beans. For now, though, it's incredibly sweet to watch the engaged gush over one another. (Ah, young love.) So here's to wishing Ariana Grande a happy 25th birthday — and wishing the happy couple the best as they work toward the next step in their relationship.