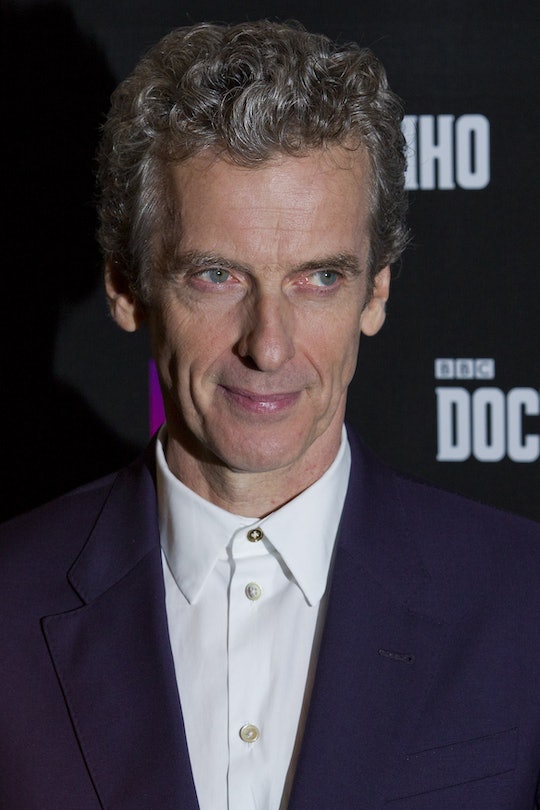 After a heartwarmingly sentimental and still hilarious sob-fest that was the Doctor Who Christmas special this year, titular actor Peter Capaldi hinted that his third season as The Doctor may be his last. If it feels like Capaldi's turn as the Time Lord feels short, you're not wrong: Previous actor Matt Smith spent only three seasons in the role as the Eleventh Doctor. Speaking on Friday in an interview with The Telegraph, Capaldi said, "This could be my final year – it’s terrifying." This tidbit comes on the heels of another major cast departure at the end of this season. 29-year old actress Jenna Coleman, who played The Doctor's companion for the past three seasons, left the show with a rather dramatic death story over the course of two episodes. Capaldi continued:

I love Doctor Who but it can be quite an insular world and I do want to do other things. There will come a time when this is over. But I knew that when I started. I was thinking about my regeneration scene from the outset. That’s my terrible melancholic nature. When you accept the job you know there’ll come a day, inevitably, when you’ll be saying goodbye.

Fans of the show — which originally debuted in 1963 and making it the longest running science-fiction series on television — were treated to a particularly lovely Doctor Who Christmas special this year, bringing back a beloved character from the Who-niverse: River Song, played by the always awesome Alex Kingston. You might remember Kingston from her time as Dr. Elizabeth Corday from the late-90s hit drama, ER.

In "The Many Husbands of River Song," fans followed along on another one of River Song's many capers as a time-traveling archaeologist, this time with the newest incarnation of The Doctor at her side, who she doesn't initially recognize. (SPOILERS from here on out, folks.)

This year's Christmas special provided a touching bookend to the wibbly wobbly timey wimey tale of River Song that has spanned six seasons, who was revealed in season six as The Doctor's wife.

When we first met River in the two-parter "Silence in the Library"/"Forest of the Dead," we learned she had an unusually close relationship with The Doctor that he didn't quite understand at the time, proven only by whispering The Doctor's real name in his ear — something fans have been waiting since 1963 to learn.

In "Silence in the Library," River reveals that the last night she spent with The Doctor was at the Singing Towers on planet Darillium. "The Husbands of River Song" takes us full circle right back to those Singing Towers as the two outwit a murderous tyrant and pull of a classic diamond heist at the same time.

From "Silence in the Library:"

And from Friday's Christmas special:

As if "The Husbands of River Song" didn't leave us emotionally wrecked enough last night, Capaldi's hinting that he might only have one more season left in him practically has me reduced to tears. I feel like we were just getting to know his as our latest Doctor! Who knows what Doctor Who showrunner Steven Moffat has in store for the tenth season of the British classic next year. Until then, I can be happy know that River and The Doctor ended up happily ever after, after all.

Images: Justin Tallis/Getty; Doctor Who (5), Not All The Prayers (2)/Tumblr; GIPHY