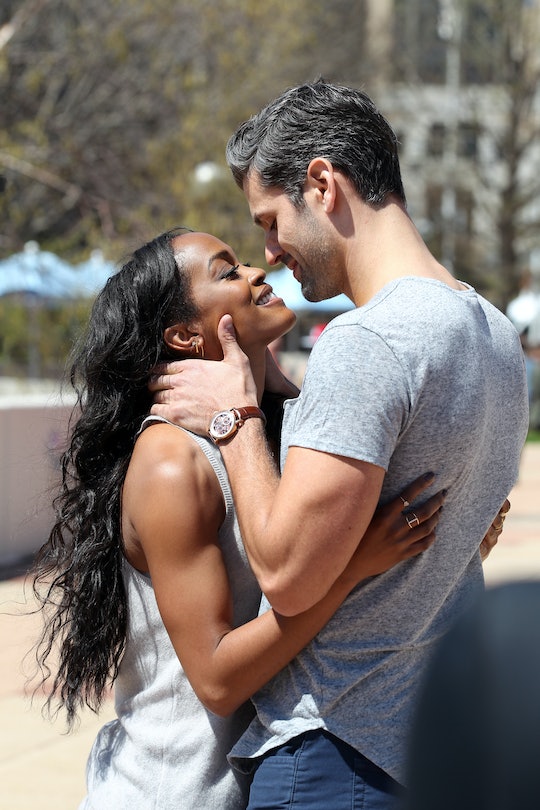 This One 'Bachelorette' Conversation Had Bachelor Nation Cringing

After a whirlwind of a Bachelorette season, Rachel finally had it down to two men: Bryan and Peter. For the past few episodes, Bachelor Nation saw how uncertain Peter was about eventually proposing to Rachel. Despite his hesitation, Rachel kept him through hometowns and the fantasy suite. Now that he's in the final two, his apprehension only heightened, and Rachel sat him down to talk about why he doesn't want to propose. Peter wants to stay with Rachel, but he doesn't want to rush into marriage. Peter and Rachel's conversation on The Bachelorette finale was honestly pretty painful to watch.

I've honestly never seen something like Rachel and Peter's conversation during the finale. It was clear that Peter wasn't ready to propose to Rachel, but he was ready to start a relationship (and a life) with her. He was ready for "baseball games" and "wine and paint nights," but after all this time he wasn't ready to make the commitment and get engaged this fast. On one hand, I can totally understand this: Peter has only dated Rachel for six weeks, and in tandem with 30 other men to boot. On the other, what did he think he was getting into when he signed up for The Bachelorette? It became apparent that neither Peter nor Rachel were ready for the emotional turmoil they went through.

After the couple's final date, they sat down for what would be their breakup conversation. Each seemed to push and pull with each other — Peter insisting he wants to be with Rachel despite not wanting to propose and Rachel not believing him, or trying to get him to the point where he could propose. At a certain point, it was evident that they weren't going to reach an agreement — and that the conversation wasn't going to end well.

Through tears, Peter and Rachel decided that they weren't on the same page in terms of their relationship. While they didn't explicitly breakup — as Chris Harrison kept pointing out — they did part ways after awhile. It was heartbreaking both for them and for Bachelor Nation as a whole. What I thought was going to be yet another rehashing of Peter proclaiming he doesn't want to propose turned into a pseudo-breakup. If Peter and Rachel aren't destined for each other, at least viewers can hope that he's the next Bachelor.