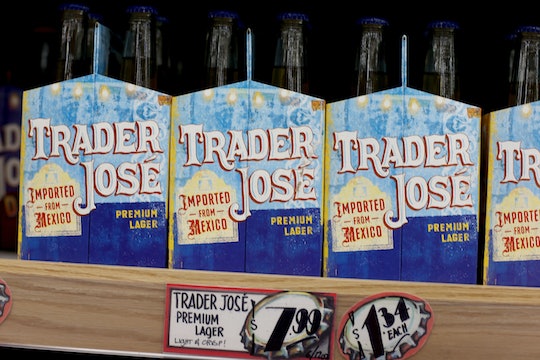 After a petition with over 2,800 signatures called attention to "racist branding and packaging" found on items like pork dumplings, frozen burrito bowls, and flatbread over the years, Trader Joe's has issued a statement about controversial names on a variety of the grocery chain's international food products, saying it's been working to update labels for "several years" now.

A petition started on Change.org with nearly 2,800 signatures has called on Trader Joe's to "remove racist branding and packaging from its stores." The petition reads, "The grocery chain labels some of its ethnic foods with modifications of 'Joe' that belies a narrative of exoticism that perpetuates harmful stereotypes."

For example, "Trader Ming" has been used for the store's Chinese food products and "Trader José" for its Mexican food items, while the brand's Middle Eastern foods have been under "Arabian Joe" and Italian foods have been found under "Trader Giotto’s."

"The common thread between all of these transgressions is the perpetuation of exoticism, the goal of which is not to appreciate other cultures, but to further other and distance them from the perceived 'normal,'" the petition reads. "The current branding, given this essential context, then becomes even more trivializing and demeaning than before. What at first seems, at worst, insensitive, further is called into question."

Kenya Friend-Daniel, Trader Joe's national director of public relations, tells Romper that the company had been working to update such packaging before the petition started. "To be clear, our efforts are not a response to the petition and began before the petition was launched," Friend-Daniel said in a statement. "We had hoped that the work would be complete by now but there are still a small number of products going through the packaging change and we expect to be done very soon."

Friend-Daniel went on to say that "while this approach to product naming may have been rooted in a lighthearted attempt at inclusiveness, we recognize that it may now have the opposite effect — one that is contrary to the welcoming, rewarding customer experience we strive to create every day."

"With this in mind, we made the decision several years ago to use only the Trader Joe's name on our products moving forward. Since then, we have been in the process of updating older labels and replacing any variations with the name Trader Joe’s, and we will continue to do so until we complete this very important work."

The company has not announced an exact date shoppers can expect to see only "Trader Joe's" labels in stores, but the petition's creator, Briones Bedell — a high school student from California, according to the Los Angeles Times — wrote in a petition update that she would like the grocery chain to "commit to a date which the packaging changes will be completed." Bedell told the Los Angeles Times that while she acknowledges that these changes take time, "the petition remains important because Trader Joe's lacks the urgency to deal with this issue in the current climate."

Trader Joe's isn't the only company to update packaging on its products as of late. Brands like Aunt Jemima and Uncle Ben's have also vowed to change or review their name and packaging amid national conversations about race and inclusion, stemming from the ongoing Black Lives Matter protests.