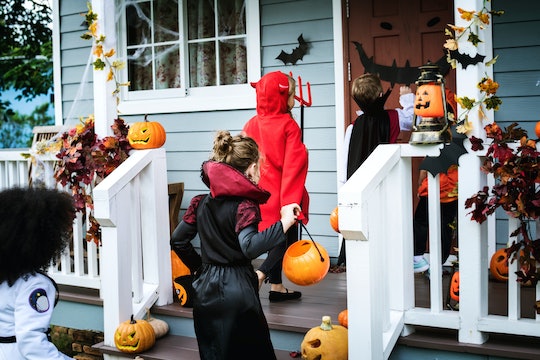 Petition To Move Date Of Halloween Goes Viral, But Chances Are It Won't Happen

Halloween is arguably one of the most fun, carefree holidays for people young and old. From dressing up in costume to consuming wild amounts of candy, there's a lot to love about this holiday with one exception — its date of Oct. 31. The event sometimes falls in the middle of the week, which can cause some issues for parents concerned with their kids' busy schedules (bedtime routines, school, homework, etc.). And this could be one reason why a petition to move Halloween to the last Saturday of the month has gone viral. But some might be wondering: Does this suggestion have any chance of happening?

The petition in question was first launched in 2018 by the nonprofit, Halloween & Costume Association, a "trade organization to promote and build the celebration of Halloween in the United States," according to CNN. And despite being an old petition, it recently started gaining traction online with over 97,000 signatures as of Sunday.

Here's what's going on in a nutshell: The petition suggests that bumping Halloween from its current date to the last Saturday in October will create a "safer, longer, stress-free celebration." It also means no more rushing to get off work in time to take the kids trick-or-treating, missing out on all the good candy, and battles to get to school the next morning.

The petition claims 3,800 people are injured each year on Halloween and 82 percent of parents don't prioritize high-visibility aids, like reflective tape, glow sticks, or finger lights, on costumes. And while children's safety is a noble cause, it's going to take more than support from the public to see Halloween moved to a new date because it requires the help of politicians.

As noted by KXAN, an NBC News affiliate station, President Donald Trump would first have to go to Congress and ask that Halloween be named a government-regulated holiday. That has only happened six times since 1888, according to the outlet, so the odds of it happening for Halloween aren't great. What's more? This cause doesn't appear to be on Trump's radar right now, which is somewhat unsurprising. Right now, he's seemingly focused on attacking Maryland Rep. Elijah Cummings. Sigh.

As for the list of current federal holidays, it includes New Year's Day, Martin Luther King Jr.'s birthday, Inauguration Day, George Washington's birthday, Memorial Day, Independence Day, Columbus Day, Veterans Day, Thanksgiving, and Christmas, according to ThoughtCo. And according to the publication, local and state governments establish their own holiday schedules, while businesses are free to do the same. This explains why some stores remain open on holidays like Christmas and Thanksgiving, while others close.

It's important to note that some of the aforementioned holidays became government-regulated events more recently than others. Martin Luther King Jr.'s birthday, for example, was first celebrated as a holiday in all 50 states in 2000, according to USA TODAY. This should give hope to those who want Halloween moved to a new date, as there's definitely a chance it could be added to the official list of federal holidays. That being said, I wouldn't count on it happening anytime soon.

Either way, it's clear people are divided on this issue.

"So I’ve seen this petition going around saying Halloween should be made the last Saturday of October every year instead of the 31st," one person tweeted. "That is f***ing stupid. There is too much historical (and spiritual) significance to just change the date to make it more convenient."

A pro-petition commenter penned: "This petition to move #Halloween to the last #Saturday of #October is smart! This would allow for more safety for children, more fun time for the parties, and zero disruption of the work week! Don’t you agree?"

Celebrating Halloween in the middle of the week or on Sunday is arguably an inconvenience, but preserving the tradition of Oct. 31 might override the stress. And, to be fair, one late night during the school year isn't that big of a deal. I guess parents will have to wait and see how this one turns out.

More Like This
Can You Light Fireworks In Your Backyard?
You Can Schedule Your Kid’s Covid Vaccine Appointment At Walmart
Kim Kardashian Had To Pause A TV Interview To Shush Her Noisy Sons In The Audience
Sarah Levy Reveals Birth Of Her Baby Boy & His Name Is A Sweet Tribute To Her Dad