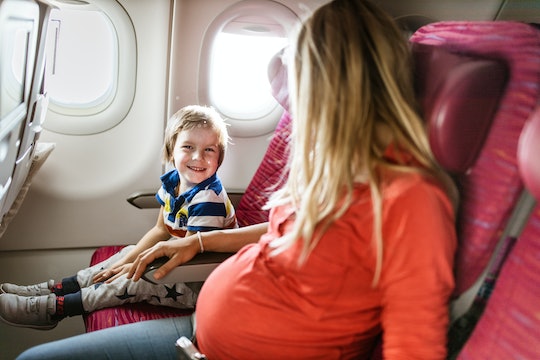 A new Consumer Reports petition has urged several U.S. airlines to seat children with their parents free of charge, arguing that families traveling with kids under the age of 13 shouldn't have to pay extra fees to ensure their child remains safe throughout the flight. The advocacy group has also sent letters to the heads of Delta Air Lines, United Airlines, and American Airlines, urging them to institute new policies geared toward protecting their youngest travelers.

"Families face a constant battle to ensure they are seated together, even when they choose seats far in advance," Anna Laitin, Consumer Reports' director of financial policy, said in a statement. "Airlines should put safety first and seat children with their families without charging them extra for it."

More than 120,000 people have signed the organization's petition demanding Delta, American, and United seat children age 13 and younger with their family members at no additional cost, according to Consumer Reports. "Complaints have been filed against your airline for separating children as young as age 2 from their families," the petition reads. "This is a security hazard for the child and a safety threat to all passengers during emergencies. It also puts an inappropriate burden on customers who sit next to an unaccompanied child."

In letters sent to Delta, American, and United, Consumer Reports noted that sexual assault and hindered evacuations were just two of the potential safety issues involved in seating young children apart from their parents. "The FBI has reported on increases in sexual assaults in commercial travel," the organization noted in its letters. "Also, emergency procedures and evacuations will certainly be slowed and compromised by anxious parents and children who are far apart from each other on the plane."

The organization shared letters it sent to Delta, American, and United ahead of Tuesday's House Aviation Subcommittee hearing, at which lawmakers are expected to hear testimony regarding airline passengers' experience with current policies and ideas on improving them. Consumer Reports' petition comes four years after Congress directed the Department of Transportation to review and, if deemed appropriate, require airlines to establish policies enabling children age 13 and younger to be seated, at no additional cost, in a seat adjacent to that of a family member older than 13. The only exception would be for instances when such a seating arrangement would require an upgrade to a different cabin class.

When no such actions appeared to have been taken, Consumer Reports said it filed a Freedom of Information Act request to learn the status of the Transportation Department's review. According to the consumer advocacy organization, 136 consumer complaints were forwarded by the Department of Transportation, which also indicated it had found it unnecessary to take action "based on the low number of complaints." Consumer Reports, however, has argued that the Transportation Department's public complaint form was not previously "well known or understood" by air travelers, and thus did not garner an accurate reading of passenger opinion.

A spokesperson for American Airlines tells Romper that its "team has spent a considerable amount of time developing" a family seating process.

"For families traveling with a child under the age of 15 who don’t have a seat assignment, our system will work to seat the child with an adult in the reservation starting 48 hours after the reservation is ticketed. This ensures the child will not be assigned a seat alone," American Airlines says. "Additionally, we block seats on flights for airport control. This enables our airport team members to move people around, as needed, at the gate. This is helpful in case families book at the last minute, rebooking due to irregular operations, etc."

A spokesperson for Delta tells Romper that the "regardless of the type of ticket purchased," the airline "works with customers on a case-by-case basis to ensure their travel needs are met."

"When customers have seating questions, we encourage them to reach out to us as soon as possible to allow for the opportunity to address their concerns," Delta says.

Romper's request for comment from United Airlines regarding the petition was not immediately returned.

While the federal government is putting airlines' policies regarding family seating arrangements under scrutiny, Laitin argued that airlines don't need government assistance. "The airlines can fix this problem without government intervention," Laitin said. "Ensuring that children are always seated with their parents regardless of the ticket purchased would improve safety and security for all travelers while easing the minds of families."