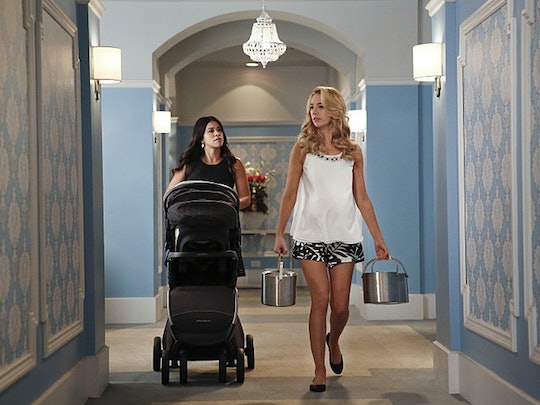 Petra & Jane Are Friends On 'Jane The Virgin,' & It's One Of The Most Important Relationships On The Show

Just a year ago, the idea of Petra sticking up for Jane might've seemed impossible — then, she was more concerned with backhanded plots. Jane calling Petra her friend and expressing worry for her would have seemed equally unlikely; Jane is compassionate, but even that has its limits. There were way too many obstacles between the two of them for a bond to seem possible. But things have been changing between Petra and Jane on Jane the Virgin this year, and they've actually become friends — and it's becoming one of the show's most exciting and important relationships.

Monday's episode ("Chapter Thirty-Eight") featured Jane and Michael looking for a house, but the only one that checked off every item on their list and was within their price range was forty minutes out of town. Rafael put his foot down (as he tends to do) because he didn't want Mateo to be so far away — but there's no denying part of it is Rafael being a little controlling. Rafael has exhibited possessiveness over Jane before because his feelings for her prevented him from letting her move on. He couched it in kindness by offering to pay for a closer house, but it was the kind of grandiose generosity that Jane couldn't possibly accept.

Meanwhile, Petra is continuing to have problems connecting to her twins. She's wandering the halls of the Marbella sleeplessly and spending very little time with her new kids. This prompts Jane to take Petra along to a new mommy group, where the other women (Jane included) explain to Petra that her symptoms sound a lot like postpartum depression. Petra freaks out and leaves, but some more gentle nudging from Jane has her seeking professional help.

It also has her standing up for Jane in a scene that was a long time coming. While Rafael whines — sorry, shares his worries about Mateo being so far away and all the other details of his current issues with Jane, Petra quickly loses patience. She gives Rafael a piece of her mind, reminding him of everything Jane has gone through — the pregnancy, Rafael's sister's involvement, all of it. It gives Rafael the push he needs to let Jane go a little bit farther away.

Jane and Petra getting over the issues between them (multiples pregnancies, lots of makeouts with Rafael, the whole thing where Petra's mom pushed Alba down the stairs...) is made all the better by how unlikely it seemed. It's the kind of support both of them will need going forward as they continue to share a baby daddy. Petra is obviously feeling the love; Jane and Michael finally find the perfect place nearby in their price range, only for it to be revealed to the audience later that Petra bought it for them under a fake name, just so Jane could have her dream house.

Forget the guys — Petra and Jane are the relationship to ship.