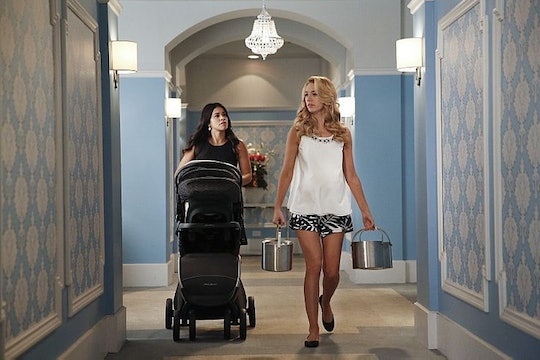 Petra On 'Jane The Virgin' Will Be A Great Mom, & Here Are 5 Reasons Why

If you're like me, you probably didn't always love Petra on Jane the Virgin right away. Let's face it, she was spoiled, deceitful, and she cheated on Rafael with his best friend (I think... I'm still not really clear on that whole identical twin thing) within the first season. And let's not forget that time Petra covered for her mother after she pushed Jane's grandma down the stairs, or when she helped cover up Ivan's murder. But, for some reason, I can't help but feel that Petra will make a great mother on Jane the Virgin, despite her past indiscretions.

Petra has grown a lot since the start of the show. Of course, inseminating herself using a turkey baster with the only sperm Rafael had left wasn't her finest moment, but she has still come a far way since she got pregnant. She continually helps Rafael get The Marbella up and running again (although this is a continued uphill battle), and she has even become closer to Jane. (Don't forget it was Petra that convinced Jane to confront her former romance novelist hero about stealing her ideas.)

Sure, Petra can be pushy, stubborn, and a bit impulsive, but being a mom is something Petra has wanted for a long time and there's no doubt in my mind she's ready and able to step up to the plate and be the best mom she can be. Don't believe me? Well here are a few reasons why I think Petra is going to be a great mom.

1. She'll Always Make Sure Her Children Have The Best

Petra has great taste. Although Jane didn't understand why Petra wanted to buy only the most expensive baby things for her twins, it just shows how Petra wants only the best for her daughters. Sure, her kids might be a little spoiled, but Petra will make sure they never go without.

2. She Won't Let Rafael Shirk Out On His Fatherly Duties

No one loves watching Rafael bond with Mateo more than I do, but Rafael has two more kids on the way and he'll have to step it up. Petra refuses to let herself, or her daughters, be pushed to the side and is determined to make sure Rafael understands that.

3. She's A Strong, Independent Woman That Doesn't Need A Man

Petra wants Rafael to be involved in her daughters' lives, but she doesn't need him in her own, and that's awesome. Petra has grown a lot as a character, and she's no longer willing to do whatever it takes to be with Rafael or settle for being his second choice. Petra will be the perfect role model for her two daughters, who will see that anything they want to do, they can do on their own.

4. She Has Jane As A Mentor

Although these two have their ups and downs, it looks like they may finally be able to find common ground, which is great because there's a lot Jane has recently learned about being a mom. Petra may not be open to Jane's tips at first, but when Petra really needs help, she'll definitely have Jane to turn to.

5. She Knows What Not To Do

I think we can all agree that the Worst Mom Award goes to Petra's mother, Magda. She constantly claimed she was doing things for Petra, but it became clear Magda was only ever looking out for herself when she framed Petra for Ivan's death. For Petra, being a good mom really means being nothing like Magda.