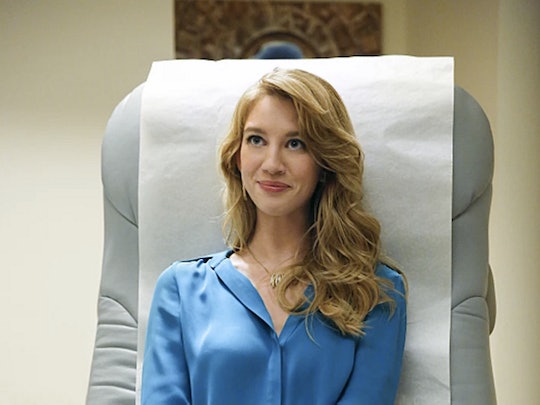 Petra Struggles With Motherhood On 'Jane the Virgin,' & It's An Important Story To Tell

Jane the Virgin's Petra has had an interesting arc over the course of the series. She started off as a manipulative villain who would do whatever she had to do to get what she wanted. However, as more details about Petra's past came to the surface (an abusive, controlling mother; a boyfriend who wasn't much better), she began to take on humanizing layers. Yael Groblas' charming performance definitely helped when it came to making Petra into a character worth rooting for. She's been able to make Petra funny, tragic, and surprisingly strong. All of those varied qualities were on full display in "Chapter Thirty-Seven," when Petra struggled with motherhood on Jane the Virgin.

The circumstances of Petra's pregnancy are almost as crazy as Jane's. After getting her hands on ex-husband Rafael's last sperm sample, Petra impregnated herself with a turkey baster and ended up with twins on the way. It was a desperate act motivated in part by her feelings for Rafael, but it definitely wasn't well thought out. Watching Petra get bigger as her temper grew shorter has been a highlight of the season, culminating in a birth that surprisingly brought her closer to forging a real friendship with Jane. Things were looking up for Petra and at the end of "Chapter Thirty-Six," it seemed like she was really content.

But, now it seems like she isn't adjusting very well at all. First Petra appeared more than reluctant to leave the hospital, having become over-reliant on the nurses to do every little thing she needed. Rafael noted that Petra didn't even want to pick up the babies, instead, she was happy to leave their care to hired help — something that continued once they got home, where Petra had hired hired two nurses to look after the girls while she immediately returned to work. There's nothing wrong with Petra seeking help or with her being eager to return to the job she loves, but more than that was clearly going on.

Rafael thought so too, which is why he first sought advice from Jane and then finally chose to dismiss the nurses for the night. While he and Petra sat holding their daughters, Petra confessed something that could be overwhelmingly scary to a new mom: she just wasn't sure that motherhood was for her. It's no surprise that Petra would have doubts considering both her own relationship with her mom and her less-than-maternal instincts. Rafael assured her that she would be a great mother, but the conflicted look on Petra's face as she gazed at her new baby proved that her doubts are definitely not assuaged.

Jane the Virgin has done an impeccable job so far of tackling real issues that new mothers have to deal with. Despite some minor setbacks, Jane took to motherhood exceptionally well, and it's great to see a different kind of story being told with Petra. Whichever way it shakes out in the end, every mother is different and they all deserve a chance to have their stories told.