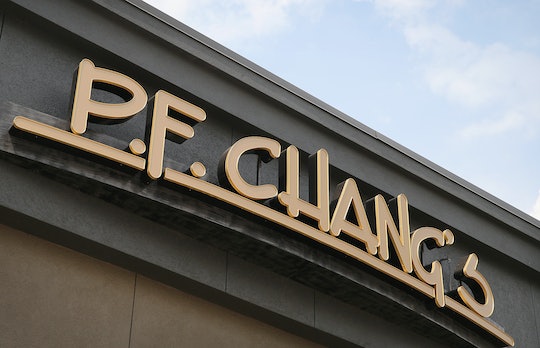 Millions Of P.F. Chang's Frozen Foods Recalled Due To An Unknown Allergen

Night after night of making dinner gets old, especially when you have other responsibilities. So, it's no surprise that people love their take out or other convenience meals. The latter of which come prepared, frozen and ready for a quick warm up to bring dinner straight from the box to your plate. But, you might want to check your freezers, as one major brand is experiencing a huge recall. P.F. Chang's frozen foods have been recalled by Conagra, according to USA Today.

Conagra Brands Inc., which distributes P.F. Chang's brand frozen entrees to retailers nationwide, is recalling 2,094,186 million pounds of frozen entrees because they contain an unknown allergen (milk) that is not declared on the packaging, according to CBS News.

The recall affects P.F. Chang’s Home Menu Chicken Pad Thai and Chicken Fried Rice with "best by" dates of September 26, 2019 through April 5, 2020, according to a statement from Conagra Brands, Inc, according to USA Today. Both products come in 22oz plastic bags.

The recalled items were shipped to retail stores nationwide. It does not include any products sold at P.F. Chang restaurants. So far, there have not been any reported cases of illness, according to a statement from the USDA.

Consumers are being asked to not eat the affected product and to throw it away or return to location of purchase.

Conagra Brand Inc. discovered the mistake during a routine package check, and noticed that milk was not listed as an allergen, according to Newsweek.

Those with questions can call Conagra customer service at 1-800-860-3498. If a lice agent is not available, they will be connected with a virtual agent, "Ask Karen," who is available 24 hours a day. Consumers can also call the USDA Customer Service Hotline at 1-888-674-6854 or submit questions online.

Unfortunately, milk allergies are one of the most common allergies among children, according to the Mayo Clinic. Reactions can range from mild to severe and include vomiting, hives, wheezing and more.

Still there are others who are lactose intolerant. This means a person's body cannot break down lactase, the main component of milk, according to The Food Allergy and Research Association. Lactose intolerance can wreak havoc on a person's digestive system causing nausea, cramps, gas, bloating and diarrhea, and more.

The P.F. Chang recall is just one of many other major recalls of popular food items in the past few weeks. Today, Tyson expanded their recall of frozen breaded chicken strips for over concerns of metal contamination, according to Time Magazine.

Even Ben and Jerry's ice cream announced a recall recently, that affect two of their most popular ice creams including Chunky Monkey and Coconut Seven Layer Bar for undeclared nut contamination, according to The New York Post.

In reality, any retail food item can be recalled for even the smallest of reasons. So it's important to keep up to date with all recalls, in case it could affect you or your family. Until then, maybe stick to non-frozen food items.