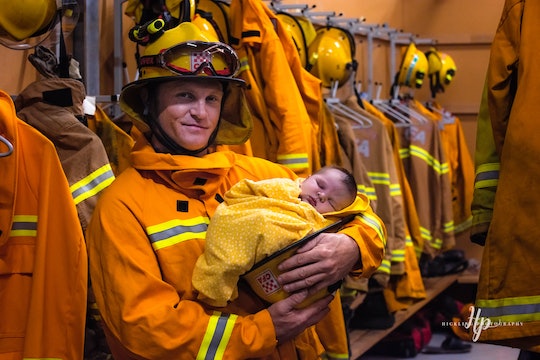 As Australia continues to be devastated by some of the worst bushfires the country has seen in decades, firefighters are battling against the blazes to try to slow their progress and rescue wildlife. In reference to the efforts of those fighting the wildfires, one photography business shared a now-viral photo of Australian firefighter holding his newborn in the station. The touching image underscores the human impact of the fires and the tireless efforts of those working to contain them.

Hickling Photography — an Australian photography business run by husband and wife Kurt and Charlyne Hickling and based in the small town of Chiltern — shared the photo to their Facebook page on Jan. 4. It has since racked up nearly 4,000 likes, 1,500 shares, and more than 200 comments. Along with taking beautiful photos, the couple are also volunteer firefighters in their own right, and have been for over 17 years, making them uniquely qualified to shoot these photos, according to TODAY.

"Today we did a very special newborn shoot at the Kiewa fire station," they wrote alongside the viral photo. "We captured this photo of baby Spencer and his dad Beau [Haines] who has fought blazes in N.S.W and Vic over the last few weeks. We want to dedicate this photo to all the men and women who are tirelessly battling these blazes to preserve and protect property and lives. Nothing is more uplifting than a firefighter returning home safely to their families."

Little Spencer was born on Christmas Eve, shortly after his dad left to fight fires in New South Wales, according to The Independent. And while Haines was able to return home in time for his son's birth, there was little time left to take professional newborn photos as a family. For that reason, he and his family turned to Hickling Photography to capture the special time in their lives.

Speaking with TODAY about the powerful photo shoot, Kurtis Hickling explained how the parents were feeling. “You could see the love,” he told the outlet. “Beau was emotional and exhausted from working a 20-hour shift and just so glad to be home with his family." Unfortunately, Haines was due back on duty the same week that the photos were taken. “It’s so important for these heroes to make it home to their families,” Kurtis Hickling said. And the commenters on his page's post would seem to agree.

"Baby Spencer, we Aussies owe it big time to your Dad Beau and all the firefighters like him," one person wrote. "You will grow up with pride knowing he is a hero. They all are. Thank you for all the sacrifices made and everything done by you all and what you have endured during this crisis. You are all incredible."

Another addressed Haines directly saying, "I'm sure you go above and beyond what is expected from you. This is your and your family's moment. In such devastation is a new life....that is yours to hold to protect and love forever. I know your fire brothers and sisters will stand with you to be with your family. Congrats and best wishes on the birth of your beautiful baby. Respect to you."

Photos like the one of Haines and baby Spencer serve as an important reminder of the human implications of disasters like the Australian bushfires. With 28 people reported dead thus far, including several volunteer firefighters, according to the BCC and The New York Times, the extent of the damage goes beyond what many may imagine. Real people are risking their lives and donating their time away from loved ones to keep the blazes at bay.