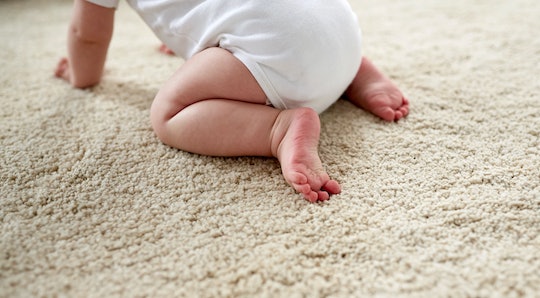 A 10-Month-Old Crawled Across A Street Alone, & The Photo Is Shocking

Over the weekend, New Jersey resident Cory Cannon was driving on Joe Parker Road in Lakewood, NJ, when he noticed something suspicious in the middle of the street. He slowed down his car and realized that a baby was crawling across the road. Luckily, the baby is now safe, according to local news outlet the Asbury Park Press. Cannon's photo of the baby, who is 10 months old according to NBC New York, quickly went viral on Facebook, bringing national attention to the story.

"I thought it was a toy or something until she moved," Cannon told the Asbury Park Press. "I knew I needed to get some sort of proof and my GPS was open on my phone, so I used my work vehicle to slow down traffic behind me and took the pic as I was exiting the vehicle and halting oncoming cars." Cannon called the police to report the incident, and someone who lived on the street came outside and returned the baby to her house. Cannon told the Asbury Park Press that he accompanied the neighbor to return the baby, and the house's door was ajar, prompting him to believe that the baby crawled outside undetected by her parents.

Cannon shared his photo of the incident on Facebook, where it went viral, but he has since removed the post, Fox News reported.

The Lakewood Police Department confirmed Cannon's suspicions that the baby most likely escaped accidentally to NJ.com. On Monday, the police told the outlet that the baby might have crawled out through the door, which was possibly left open by one of the baby's siblings. The police also said the family had no idea the baby had snuck outside and onto the road until their neighbor brought her home.

Even though the baby is now safe, both the police and the New Jersey department of Child Protection and Permanency are investigating the issue, NJ.com reported. "Anytime you have a child that’s endangered [people from the state's child welfare organization] get involved to make sure the child is safe," Lakewood's mayor Ray Coles told the Asbury Park Press.

A neighbor of the family, who asked to remain anonymous, told the Asbury Park Press that she often sees them playing at the park with their kids. “It’s devastating what people are saying on social media,” she told the newspaper. “I’m personally destroyed by this because I know the family.”

Based on all the reports, it truly seems like the baby sneaking outside was a complete accident, and I have no doubt that her parents were terrified and upset. However, it was an accident that could have been avoided by making sure the front door was locked, and keeping the baby under constant supervision.

As explained by Health Service Executive, young children are naturally curious, and they do not understand danger. The organization suggests guardians constantly pay attention to young children, as it increases the chance of the guardian being able to act quickly and prevent a dangerous situation from happening.

It's such a relief that the baby was rescued and is now safe, and hopefully this story serves as a reminder to parents that children sometimes need more supervision than they think.