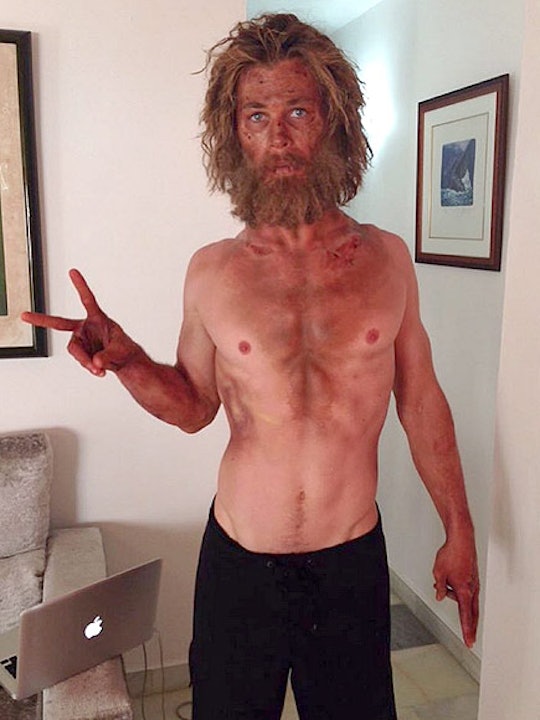 The good news is that a movie based on Herman Melville’s Moby Dick might actually be interesting. The even better news is that Chris Hemsworth is playing the first mate. The scary news? Hemsworth had to lose a lot of weight for In the Heart of the Sea. The actor, who relinquished his title of People’s Sexiest Man Alive to David Beckham last week, posted a pic on Instagram this weekend of him on the set of the film. And he looks mangy, dirty, and super scrawny. Or, like he's been stranded on an island, which is the point. That doesn't mean we have to like it. To get the look for the shipwrecked scenes, he told Entertainment Weekly that he basically had to starve himself:

We have to shoot the really skinny stuff where we drop down to 5, 6, 700 calories a day, a good three or four weeks and it's going to be pretty uncomfortable, but we'll be together in our misery. I spend more time thinking about food than anything else at the moment.

Uh, who wouldn't be thinking about lunch on a few hundred calories a day? Of course it's his job (and you can be sure he's being properly compensated for it), but how do you not feel bad for this dude? Do you know what 500 calories means?! That’s the same amount of calories in a grande pumpkin spiced latte at Starbucks. Just one. That is just not right.

And you thought the paleo diet was tough.

He's not the only actor that has had to undergo very extreme diets for a role. But it seems easier (or at least more fun) to beef up like Bradley Cooper did for American Sniper. (He gained 225 pounds.) Any excuse for an extra snack is fine by me. But if you're playing a prisoner or a shipwrecked sailor, you have to stay lean. Tom Hanks lost more than 50 pounds for Castaway, for example.

Insane or not, sometimes an actor has to go all in. In the Heart of the Sea is directed by Ron Howard and is based on the real-life shipwreck that inspired Herman Melville's classic novel, Moby Dick. It comes out Dec. 11, but make sure you bring snacks. The movie's about 90 days stranded on an island — you're gonna get hungry looking at a lot of coconut water and berries.