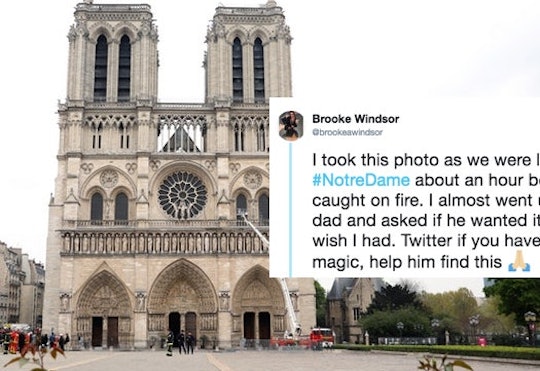 Millions of tourists visit the famed Notre Dame cathedral in Paris every year. And two of those people, possibly a father and daughter, were photographed before the Notre Dame fire on Monday, a blaze that destroyed the cathedral's roof and spire. Now the woman who snapped the heartwarming photo, Brooke Windsor, is hopeful that Twitter will be able to identify the adorable 'dad and daughter' who have since captured hearts around the world.

It's not uncommon for tourists to snap photos in front of an iconic spot, whether it be the Empire State Building or the Leaning Tower of Pisa, to name a few examples. Windsor, a 23-year-old tourist visiting Notre Dame, was participating in this exact ritual an hour before the blaze broke out, according to the BBC.

In one of Windsor's snaps, she captured a possible father and daughter playing in front of the gorgeous scenery. The man in the photo is seen swinging around the little girl, a scene that is best described as idyllic.

"I took this photo as we were leaving #NotreDame about an hour before it caught on fire," Windsor tweeted Monday evening. "I almost went up to the dad and asked if he wanted it. Now I wish I had. Twitter if you have any magic, help him find this."

Windsor also added some clarifying information to her initial tweet, explaining that she isn't sure whether the pair are actually father and daughter.

"I do not know for sure if it was a dad and daughter, it’s simply the dynamic I observed from them while debating on interrupting this moment," she wrote in a tweet. "It may be an uncle, brother, friend, who knows until we find them. It was taken at 5:57 local time."

As of Tuesday, Windsor's initial tweet has been shared over 118,000 times and has received around 242,000 likes. Given the carefree and sweet scene depicted in Windsor's photo, it's understandable why people want to help find the pair.

"I want to see this as a feel good news story within the next 24 hrs that this picture makes it to that family," one person tweeted.

Someone else said: "Twitter PLEASE do the thing with this one. This is such a good picture."

Another commenter chimed in: "This photo captures connections between generations, between eras. It is so beautiful, so poignant."

Unfortunately, Windsor hasn't been able to locate the two as of Tuesday morning.

"No, I have not been able to find the folks in the photo but I am hopeful," she tweeted. "Twitter sure knows how to step up."

She also encouraged people to keep sharing the poignant shot, writing: "Yes, you may share this photo as you wish. Help us find the man and child."

Even if Windsor never finds the 'father and daughter' in her photo, it doesn't negate the powerful emotions it has inspired in commenters across the world. The shot is a reminder of Notre Dame's significance, beauty, and it's a tribute to every person who holds the cathedral close to their heart.

More Like This
Harry Styles Running To Hug His 78-Year-Old Super Fan At The Grammys Will Make Your Day
Parents Have Thoughts After Court Orders Nursing Mom To Use Bottle In Custody Dispute
6-Year-Old Boy Has Zero Regrets After Ordering $1,000 Worth Of Food On Grubhub
Eagles Coach Nick Sirianni Brought His Kids To A Press Conference & It Was Hilarious
What Parents Are Talking About — Delivered Straight To Your Inbox