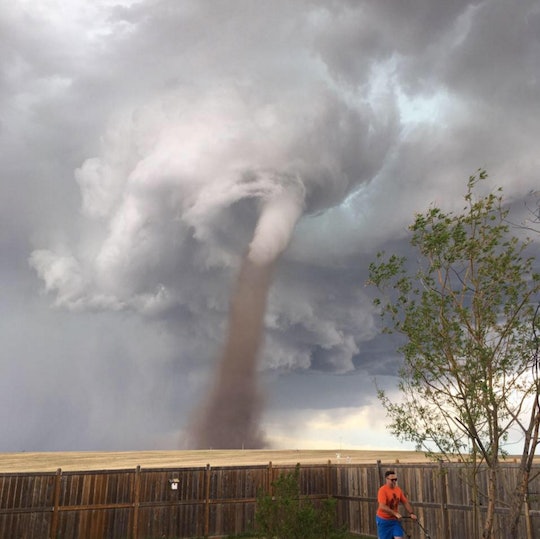 Sometimes, despite the confusion, danger, and despair on your horizon, you've just got to go on with your life. Many people have been feeling this strange mixture in recent months, and nothing captures the feeling better than a photo of a dad mowing his lawn by a tornado. Now, the photo is going viral for all the right reasons.

The dad in question is Theunis Wessels, who lives in Three Hills, Alberta, Canada with his wife, Cecilia, and their children. On a recent Friday night, Theunis was thinking about his to-do list, and decided that, hey, that lawn of his needed some attention. So he headed on outside to get stuff done. Cecilia was napping, but her 9-year-old daughter woke her up, perhaps rightly concerned that her dad was outside with a freaking tornado in the sky and wouldn't come in, according to the BBC. After checking on her husband, who assured her that everything was fine (apparently, the tornado was not as close as it looked in the photo, and Theunis knows a fair bit about twisters after attending a storm-chasing seminar), Cecilia snapped the picture in question to send to her parents back in South Africa, and put it on Facebook with the caption, "My beast mowing the lawn with a breeze in his hair." Nobody in the family had any idea that it would blow up on social media, but it's no surprise that it did. Just look at it:

Theunis, for his part, told the press that he was "keeping an eye on it" which, as one user on social media pointed out, was the epitome of "Classic Dad."

And hey, we've all had a bit of the Theunis determination inside of us recently, as we attempt to go about our lives while the world seems increasingly scarier. Sure, the United States may have pulled out of the Paris Accord, making tackling climate change even more daunting than it was before and raising concerns about the fate of the planet, but also, someone needs to make the kids dinner. Yes, the freedom of the press is being attacked on a regular basis, but if the laundry doesn't get done pronto, what will we do for underwear?

Turns out that the tornado behind Theunis ended up being relatively harmless. Thankfully, according to the BBC, nobody in town was injured, and the property damage was relatively minor.

Go on with your bad self, Theunis. We'll try to do the same.