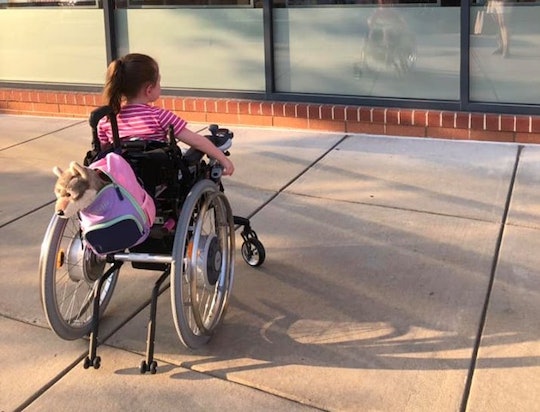 It's no secret that representation matters. But many are getting to see just how impactful inclusive advertising campaigns can be thanks to a heartwarming photo of a young girl using a wheelchair mesmerized by an Ulta ad that featured another woman in wheelchair. The photo, which was shared by the girl's mother on Facebook last week, has since gone viral, with more than 73,000 shares and over 84,000 reactions as of Monday afternoon.

"Well Ulta, you absolutely stopped my girl in her tracks this evening," Carolyn Kovacs Anderson wrote in a post on Facebook that featured a photograph of her 4-year-old daughter Maren looking at a beauty advertisement centered around a woman in a wheelchair. "It was mesmerizing to watch her stop, turn, and gaze at this poster. So thank you."

Kovacs Anderson tells Romper that Maren has a rare disease caused by a mutation to her CACNA1A gene but has worked hard to overcome the challenges her disease presents her with. Recently, that has included practicing driving her new wheelchair. In fact, Maren was cruising along in her chair near one of Ulta Beauty's stores in Leesburg, Virginia, when she stopped suddenly and focused all of her attention on the ad.

Due to the receptive and expressive language delays Maren exhibits, Kovacs Anderson says her actions tend to carry more meaning — and this was the first time she'd ever been observed stopping and seeming to really connect with an image of a wheelchair user. Kovacs Anderson described the moment as "amazing," adding that she thinks seeing the advertisement helped her daughter to feel more included. And people on Facebook seem to agree, as one person commented on the photo, "Feeling included is priceless!"

Since hearing of Maren's experience, Ulta Beauty has said it's even more inspired to continue running inclusive advertising campaigns. "We love that this family shared such an amazing moment and were touched to see Maren looking at the image in our window — it makes us incredibly proud," a spokesperson for Ulta Beauty told NBC News Washington when asked about the ad and photo. "We feel even more inspired to continue to feature amazing people that help us shape how the world sees beauty."

The beauty retailer told ABC News affiliate WJLA that the ad Maren saw featured beauty influencer Steph Aiello and was part of a larger advertisement campaign designed to showcase the brand's commitment to including and representing all.

In an Instagram post celebrating her poster, Aiello applauded Ulta Beauty for "helping us change what's considered 'normal' and 'beautiful'" with its ad campaign. "[Eight years ago when I found out I was a quadriplegic, I never thought I could dream THIS big," she wrote. "I thought feeding myself and dressing myself would be my biggest accomplishments. They are. Those are my own wins... but this accomplishment is for US. It's for my beautiful community who deserves to be SEEN and HEARD in any and every industry."

What makes the story even better? Maren may get the chance to meet the woman whose image captured her attention so fully. "We have briefly spoken to Ulta Beauty and hope Maren and the model will be able to meet," Kovacs Anderson tells Romper. "She is such a motivated woman with a strong voice."