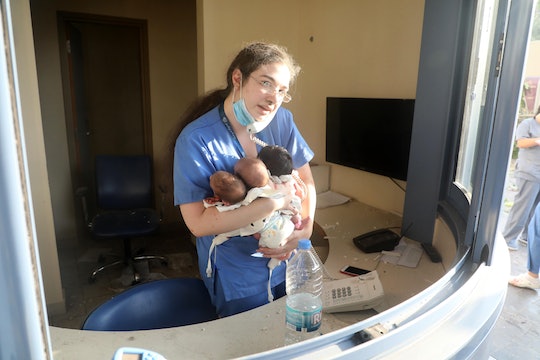 A massive explosion in Lebanon's capital city has destroyed buildings and left at least 135 people dead, another 5,000 injured, and dozens more missing. Early images from the Middle Eastern country show a city decimated after a stockpile of ammonium nitrate exploded at Beirut's port, shaking buildings, shattering windows, and sending debris flying for miles. Amid the devastation, however, an incredible photo of a nurse holding three newborns in the explosion's aftermath has gone viral as a symbol of courage, bravery, and hope.

"Sixteen years of press photography and lots of wars. I can say I didn't see what I saw today," photojournalist Bilal Jawich wrote when sharing the viral photograph on Facebook on Aug. 4. "This 'heroine' caught me inside the hospital and was accelerating to call despite the suspension of communication holding three newborn babies and surrounded by dozens of bodies and wounded."

Jawich told CNN Arabic that "professional intuition" drew him to Al Roum hospital, in Beirut's Ashrafieh district after Wednesday's blast. It was there that he saw a nurse cradling three newborns in her arms amongst the wreckage of the hospital. According to Jawich, several dead bodies and injured people lay nearby, sharply contrasting the symbol of life the newborns represented. Ultimately, Jawich's eye was drawn to the nurse's demeanor and how she seemed ready to handle any challenge thrown her way.

"I noticed the nurse's calm, which contrasted the surrounding atmosphere just one meter away," he told CNN. "However, the nurse looked like she possessed a hidden force that gave her self-control and the ability to save those children. People stand out amidst these violent and dark and evil circumstances and this nurse was up to the task."

The nurse, identified as Pamela Zeinoun, told Arab News she first and foremost concerned about the babies' safety. "I managed to carry three between my arms, and my colleague carried the other two," she told Arab New. "My main concern was to ensure their safety, because they’re very weak." The news outlet reported that Zeinoun "was knocked out inside the maternity ward when the blast hit."

A spokesperson for Al Roum hospital told CNN all three newborns and their mothers had since been transferred to other, less damaged, hospitals.

While those newborns and their mothers have shelter for now, it's unclear if they'll have safe homes to return to. According to Reuters, officials have said the explosion at the port left roughly 25,000 people in Beirut without homes safe or fit enough to be lived in. To help families in Lebanon in the aftermath of Wednesday's deadly explosion, you can donate to organizations such as UNICEF, Impact Lebanon, Save the Children, and The Lebanese Red Cross.