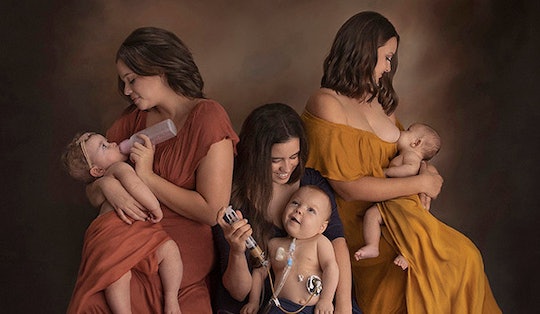 Beautiful Photo Celebrates The Many Ways Mothers Nurture Their Children

At face value, it can be difficult to argue against the saying that "breast is best," given the health benefits breastfeeding can provide both mothers and babies as well as the money that can be saved from not buying formula, for example. But, the reality is, not every mother can or chooses to breastfeed for a variety of reasons. And this viral photo of three moms feeding their babies, all in different ways, is a beautiful reminder that nourishment takes many forms.

Felicia Saunders, a photographer based in Henderson, Nevada, is the mom of two little boys. And from personal experience, she has learned that sometimes breastfeeding just doesn't work out — no matter how hard you try. "Before I had my first son, I had ideals from social stigmas that I was to only breastfeed or else I would be considered a failure," Saunders tells Romper. "I tried to breastfeed but my baby had a condition which prevented him from latching properly."

Despite visiting lactation consultants, pumping, trying different breast shields, using a supplemental nursing system (SNS,) eating special lactation drinks and cookies, and using supplements, Saunders was simply unable to produce enough breast milk to feed her son. Her baby started to lose weight, and Saunders says she felt like she had "already failed as a mother."

"I was overwhelmed with feelings of guilt and shame because I didn’t fit the mold, I was unable to do what the videos and mommy blogs told me I should do. I reluctantly began to bottle feed with formula," Saunders explains. "Those feelings of guilt shame and failure soon started to fade as I watched my little boy become 'milk drunk' for the first time and he began gaining weight."

Ahead of National Breastfeeding Month this year, which takes place every August, Saunders decided she wanted to do a photo shoot that celebrated the different ways parents feed their babies. Because she is keenly aware of how moms who are unable to breastfeed might feel.

"I knew there would be a lot of posts and articles promoting breastfeeding and that there would be a lot of mothers who would be feeling like failures or experiencing 'mom guilt,'" Saunders tells Romper. "I wanted all mothers to know that they should be proud about how they feed their children and that they are equally as impressive and strong, no matter what style. I wanted to celebrate Motherhood and the bond shared with a mother and child that is created during nourishment."

Just look at all of those loving mamas nurturing their little ones!

"Being an artist I wanted to capture a moment the bond between a mother and child that happens while feeding in different forms to show other mothers that they are not a failure because their circumstances are different," Saunders tells Romper.

"I photographed each mom and baby together prior to the group shot, each one had their own special bond," Saunders shares. "When they all came together in my frame each one of those special bonds shined through but also created something greater than their sums. I knew I was capturing something unique."

"We are moms and dads doing what we know is best for our children and ourselves," Saunders says, adding that her "message is that moms and dads should be unified in that we love our babies and we do what is best for them and not pass judgments. We nourish our babies with the same kind of love no matter how that method may be."

So far, the feedback from Saunders' original Facebook post — which featured the photo of all three moms and their babies, and has received more than 3,800 reactions and over 5,600 shares — has been overwhelmingly positive.

"Mothers from all over the world have emailed me to tell me their own personal stories about feeding their babies and how this image has validated them, brought back fond memories, or lifted the guilt that they have been feeling," Saunders tells Romper. "My inboxes and notifications are flooded with gratitude for being inclusive and helping many feel seen. My heart is so full from all the positive amazing messages I've received."

More Like This
41 Strong & Sweet Baby Boy Names That Start With “K”
Can You Burp A Baby Too Hard? A Pediatrician Shares Tips For Gassy Tummies
Celebrate Baby's First Christmas With These 40 Instagram Captions
The “Tripledemic” Is Scary, But I Feel Less Helpless When I Wear A Mask