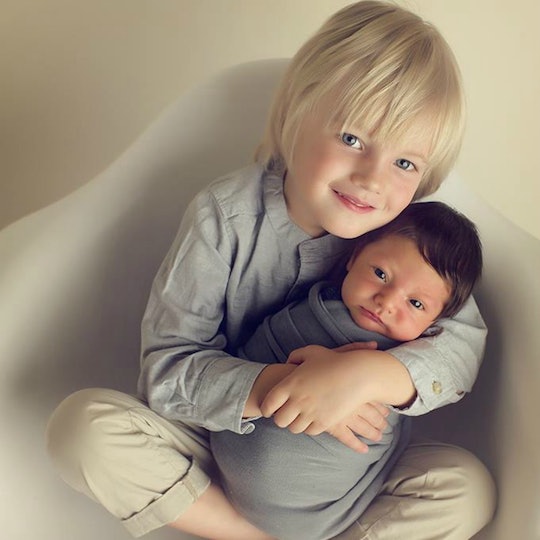 Photos Of This Mom's Car Birth Will Make You Weepy

Most expectant parents have a birth plan. But whether you're calling the doctor or the doula, no amount of planning can prepare you for that moment. Sometimes it just happens too fast to take in. The Strunk family, though, was not about to let their birth plan get away from them. When Lauren Strunk went into labor in late February, she was sure to call her birth photographer to come along for the ride. It turned out to be one of the first really good decisions she'd make as a new mother: While on the way to the hospital, the photographer captured Strunk giving birth in the car and the pictures of that moment are totally captivating (not to mention worth showing at every Strunk family reunion for basically ever).

After the Florida mom went into labor at home, the couple ended up waiting a bit for their 3-year-old son Harrison's babysitter to arrive. As families often do, they decided to multi-task and call their birth photographer Stephanie Knowles of Jaiden Photography, who had planned on documenting the moment, as well. Knowles was in the car behind the couple on the way to the hospital when Lauren realized that there was no way that they'd make it in time for the baby's arrival.

Baby Parker was already on his way. His dad, Lauren's husband Noah, had missed the turn to the emergency room, and unfortunately, babies wait for no one. (No, this is not a plot to a sitcom, but a real thing that happens sometimes when you're under extreme stress and your wife is going into labor.)

Noah made up for his directional fluke shortly thereafter, whether he was prepared for it or not. Lauren told Romper:

Luckily, Knowles, the birth photographer was just behind them and ready to shoot. Sure, she had another setting (and some better lighting techniques, probably) in mind, but she snapped away. She caught Noah delivering his own son in the back of the car.

I know. Pass the tissues. But also, let's all give some mad props to both Noah and Knowles for remaining calm enough in an insane situation to take pictures and do things that aren't really in their job descriptions, and to Lauren for being a general badass mom. Giving birth is not easy (or pretty, or quiet), but the images show all the great things humans can do when they're determined. Parker came out so fast that Noah had to catch him just after the shoulders emerged, according to Knowles on Facebook, and Lauren instinctively grabbed his arm, too.

Lauren told Romper she was glad she made the quick call to Knowles:

We are so grateful to Stephanie that she was able to capture the moment so we can remember it because looking back on it it's kind of a blur! We wanted to get our baby here safely and knew we had to act fast.

Strunk's mother was also right behind the photographer and calling the intercom to the emergency room as the photos were being taken. The baby and mother were taken into medical care within eight minutes of Parker being born. They're all safe and sound now. Lauren said that Harrison is enjoying big brother duty already.

"Harrison has been the best big brother, very attentive to Little Parker and making sure mommy is comfortable too. We are settling in as a family of four and could not be happier," she told Romper.

Talk about a birth story, right?