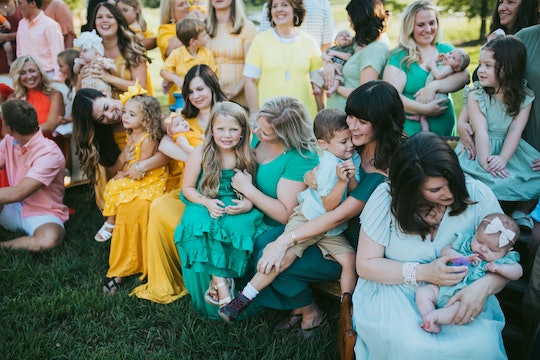 It can be easy for expecting mothers to feel alone or discouraged after suffering a miscarriage, and these feelings can stick with parents even after a successful pregnancy. But there is strength in numbers, and this photographer's rainbow baby photoshoot is a powerful tribute for anyone who has experienced a pregnancy loss. Not only are the photos stunning, but the snapshots act as a reminder that no parent should ever feel ashamed about loss.

Alabama-based photographer Ashley Sargent has photographed countless newborn babies, and understands how important each baby's story is, especially if they're a rainbow baby. Rainbow babies (babies born after a miscarriage) hold a special place in parents' hearts for so many reasons, but especially because they're the lightness that comes after that "storm" in their lives. This exact sentiment is what inspired Sargent to get women and their rainbow babies together for one amazing photoshoot.

"It was very humbling and very emotional," she told People. "I cried seeing them all together and seeing all of us who have overcome. Knowing each of them and hearing their stories, it was just incredible to step back and see what we had all pulled together."

Needless to say, the impact of the shoot was seriously powerful for all of the women who participated. "We wanted to spread the message of hope and 'You're not alone,'" Sargent told Good Morning America. "I never experienced a miscarriage myself, but I dealt with infertility. It's a very [lonely] feeling that you have."

Sargent had participants dress themselves and their rainbow babies in solid colors, resulting in one gorgeous rainbow representing love, strength, and hope for the future.

As previously stated, a rainbow baby is "a baby born after a miscarriage, stillborn, or neonatal death," according to Parents. They're called rainbow babies because they're miracles and are born in the wake of what can be dark and scary, like a rainstorm.

Rainbow babies are associated with so much happiness, but it's normal for moms to feel as if they're alone when it comes to suffering a major loss, especially since so many people are hesitant to share their stories. And this is why it's inspiring to see a group of women with their own rainbow children, knowing that they've overcome so much.

During the photoshoot, the women posed with balloons to physically represent them letting go of their pain. "I asked them to take a balloon and remember the children that they had lost and to let go of all of the feelings and the pain and the hurt that they went through and to let go of that balloon," Sargent told TODAY. "It was by far the most emotional time during the session."

Sargent can relate to this sentiment as she struggled with fertility issues herself.

"Seven years ago, I began to have a desire come into my heart to become a mother," she explained on Facebook. It completely consumed me and I expected it to be so easy.

She continued: "For nearly four years we struggled with infertility. I began to lose hope. I felt so ashamed of myself. I felt like there was something wrong with me... like it was my fault that we couldn't have this child we so desperately wanted."

It's important to note here that 10 to 15 percent of pregnancies end in miscarriage in the United States, according to March of Dimes. And given the large number of people who've experienced a miscarriage before, it's crucial there's more public awareness about this issue. I don't know about you guys, but I think Sargent's gorgeous rainbow photoshoot is a great place to start.

More Like This
"Crybaby Ambulance" In Europe Will Help Exhausted Parents
When Can Babies Hold Their Head Up? Experts Explain
Here’s How Many Calories You Burn When Nursing
There's A Good Reason Why Your Baby Is So In Love With CoComelon