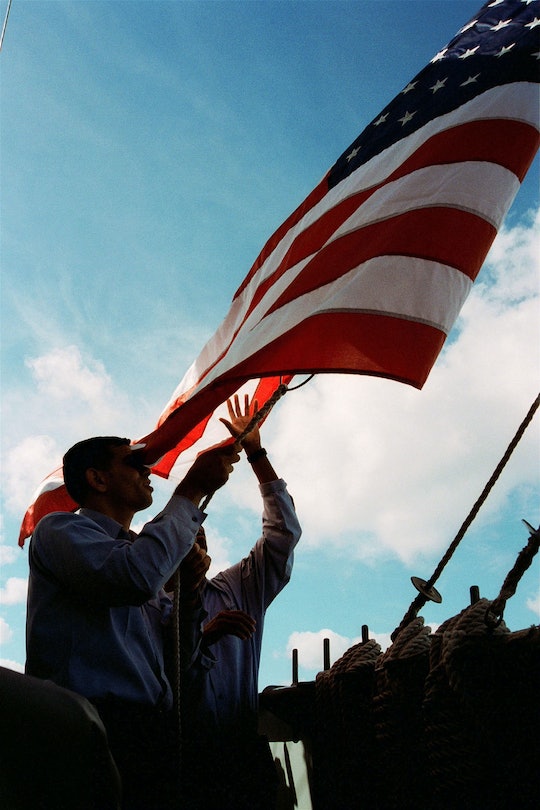 The 2016 election season had been polarizing and vitriolic, but the 15th anniversary of the September 11, 2001, terrorist attacks that killed nearly 3,000 in the United States and catapulted the country in the age of terror is a day to transcend its divisiveness. On this somber date, the the near-constant sparring between Hillary Clinton, Donald Trump, and their supporters recedes just a bit as Americans come together to honor the many victims and heroes of that day. Now, it's easy to forget that Americans readily set aside their political and ideological differences to deal with the shock, grief, fear, and sense of unbearable loss that permeated that frantic time after the Twin Towers fell, the Pentagon lit up in flames, and Flight 93 crashed. But photos of 9/11 remind us how the country stood together, and offer hope that we will do so again in the future.

Across the country and even the world this September 11, the fact that Clinton disparaged Trump supporters as a "baskets of deplorables" is planted firmly in yesterday's news cycle. Instead, Americans across the nation are transported back in time to one horrifying day 15 years ago as they commemorate those lost in the savage, coordinated attacks both privately and at public ceremonies — and back to a brief time when showing the rest of the world that we were united as one was a top priority.

Photos of that time, and from moments of solidarity in the ensuing years, show that the terrorists will never, ever win.

It's evident in the strong chants and unwavering patriotism of those present at Ground Zero when President George W. Bush visited, promising, "I can hear you, The rest of the world hears you. And the people who knocked these buildings down will hear all of us soon."

And it lives on in the present-day remarks of our current president on this day of tragic remembrances. In a video address to the nation, President Barack Obama discussed strides made in the fight against terror — like the 2011 U.S. operation that killed 9/11 orchestrator Osama bin Laden —  implored Americans to consider who are are at our core, and what makes us great as a nation:

As we reflect on these past 15 years, it's also important to remember what has not changed: the core values that define us as Americans, the resilience that sustains us. After all, terrorists will never be able to defeat the United States. Their only hope is to terrorize us into changing who who we are or our way of life. That's why we Americans will never give into fear. That's why, this weekend, we remember the true spirit of 9/11. We're still the America of heroes who ran into harm's way, of ordinary folks who took down the hijackers, of families who turned their pain into hope. We are still the America that looks out for one another, bound by our shared belief that I am my brother's keeper. I am my sister's keeper. In the face of terrorism, how we respond matters. We cannot give in to those who would divide us.

Americans have shown over the years that no matter what happens in the world of politics, the country's controversial resulting involvement in the Middle East, or who the nest president, we truly will #NeverForget.

The sentiment that we are one nation reverberates through the years, even as many of us get embroiled in (still essential) political discussions and disagreements.

September 11, 2001, was truly one of the most trying days in the history of the United States, and the memory of what happened and what was lost won't fade quickly or easily. And it shouldn't. And just as we should always remember the devastation of that time, so too should we always remember the way the nation stood together as one.