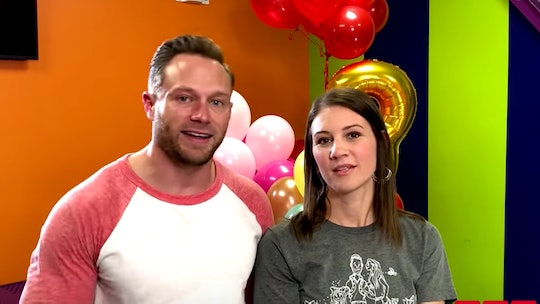 Fans of TLC's OutDaughtered are used to seeing Adam and Danielle Busby in the midst of a house-full of young daughters. That's because they're parents to 7-year-old Blayke, along with 3-year-old quintuplets — Ava, Riley, Parker, Hazel, and Olivia. Yep, that's six daughters altogether. As you can imagine, there's never a lack of excitement, noise, or love in the Busbys' lives. This is evident by their TV series, as well as their Instagram accounts filled with lively little girls. However, photos of Adam and Danielle Busby before OutDaughtered show a much more relaxing era of their lives.

But first, let's get some perspective on their journey. In order to get pregnant with their oldest daughter, Blayke, Adam and Danielle were both on fertility treatments and went through a procedure called intrauterine insemination (IUI) — which was ultimately successful after several rounds, according to a blog post on the couple's website. To get pregnant a second time, the Busbys again relied on fertility drugs and IUI. During the initial ultrasound for their second round, they saw nothing on the screen — even though Danielle's HCG levels were off the charts. "The next ultrasound was pure shock!! There were clear as day 3 sacs we could see on the screen at one time and then ONE more kind of off to the side. So now we were looking at FOUR babies," Danielle wrote. "Adam is about to pass out and I am laughing!" She continued:

We were told by the doctor to come back in two weeks for another ultrasound and to prepare ourselves for what could possibly happen…we may not see this many babies next time. We go back and what do you know…God had more in store for us. We immediately saw 2 babies in one sac…AND that was NOT there last time, lol.

The quintuplets were born on April 8, 2015, at 28 weeks gestation, according to TLC. But before this fateful day that changed their lives forever, the Busbys were just a regular family of three. Here's a shot of Adam, Danielle, and Blayke back in December 2014, when Danielle was still pregnant with the quints — and before their OutDaughtered days.

And here's a photo of the couple in July 2014 — back in the days when getting a babysitter for just one kid was a piece of cake.

I wonder if Danielle and Adam can still remember these (relatively) quiet days with just one little girl to keep track of? They look so serene and well-rested, here.

The shot below was taken in March 2014, at a Mardi Gras Parade. Here, Blayke was 3 years old — the same age as the quints are now. (And I have a feeling have five 3-year-olds at a parade these days is slightly more stressful.)

Keep scrolling to see even more photos of Adam and Danielle Busby when they were still just parents of one little girl — and well before OutDaughtered.

And before Blayke was in the picture? Well, just take a look at this throwback photo from the early 2000s, and see for yourself. Danielle shared this gem via Instagram back in February, according to Entertainment Daily, captioning it, "#tbt to when this lad @adambuzzloved him some pooka shells 🤪#thankgoodnessthosedaysareover." LOL! But seriously, they look like babies!

Adam and Danielle first met in 2003 when they were both working at a Target store in Lake Charles, Louisiana, Country Living reported. "After a few months of working almost side by side together at Target, Adam finally got the courage to say a few words to me," Danielle wrote on the family's blog. "The first words out of his mouth were 'hey beautiful.' My thoughts at first were…’oh wow! You never talk to me and now your trying to hit on me….real smooth’. She continued:

Obviously it must have worked, ha. A few weeks go by where we started eating lunch and taking our Target 15 min breaks together…(so romantic).

Eventually, Adam worked up the courage to ask Danielle out on a date — which he then backed out of, according to the blog post. They later made plans to go on a "real date" at a local restaurant — which ended up being dinner with his entire family for his sister's birthday. "[I was] stood up on our first date, then found out our actual next date was a surprise for me to go meet his entire family at his sister’s birthday party," Danielle wrote on the blog. "God must have been in the works here making our hearts collide."

These days, it's safe to say things are a little busier for the Busbys.

Clearly, life has changed so much for Adam and Danielle Busby in the past few years. (Having quintuplets will do that.) I'm sure there were days after the quints were first birth when they sat there wondering what they had gotten themselves into. Judging by their Instagram photos at least, their lives were a lot simpler as a family of three. But as crazy and as busy as their lives are today, I'm also willing to bet Danielle and Adam wouldn't trade their lives with six daughters for anything.