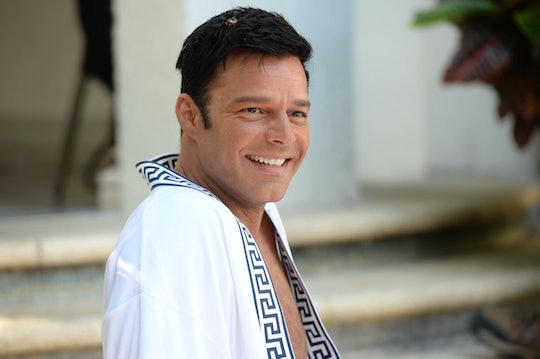 The second season of American Crime Story centers around the assassination of Gianni Versace and seeks to show the inner workings of the mind of his killer, Andrew Cunanan. The series, based on Maureen Orth's book Vulgar Favors, looks closely into Versace's life and those who knew him best, including his boyfriend Antonio D'Amico. Playing him in the FX series is Ricky Martin and based on the photos of Antonio D'Amico compared to Ricky Martin, the resemblance between the two is downright uncanny.

If you're unfamiliar with D'Amico, he also worked in fashion and dated Versace for over 10 years. Although D'Amico began as a model, he started working alongside Versace, designing for Versace Sport and Istante. After Versace's passing, D'Amico's relationship with the Versace family was strained and though he told The Guardian he was supposed to receive a monthly pension of about $32,000 for life as well as the right to live in Versace's homes, according to Versace's will, that wasn't what happened. Instead, he only received a fraction of the pension and walked away from fighting for the rest. D'Amico also told The Guardian that he then survived from depression after Versace's death. "I was in a nightmare," he told the outlet. "I felt nothing and gave no importance to anything … the house, the money … because it felt false to have expectations of life."

Over the past couple of decades, D'Amico has returned to fashion releasing a few of his own fashion lines to various levels of success and he revealed to The Guardian that he has found love again. He and his partner now life a "simple life" in northern Italian countryside.

You can see how similar Martin looks like D'Amico in the photos below.

You Can Definitely See The Similarities

In these side-by-side images, it's easy to see why Martin was cast to play Antonio. They have very similar facial features, especially around the chin.

They Kind Of Have The Same Nose

Along the list of facial features these two shares, their noses look very similar. Clearly whoever was doing the casting knew exactly what they were doing.

Even With Facial Hair They Look Alike

Before Martin became clean shaven for the show, one could argue he already had the Antonio look. The mustache and the beard totally gives him the scruffy look Antonio sometimes wore.

But even though Martin may have the look of D'Amico, the fashion designer has not been pleased with Martin's portrayal of him or the show, particularly regarding the moment when D'Amico found Versace after he was shot. "The picture of Ricky Martin holding the body in his arms is ridiculous," D'Amico told The Observer. "Maybe it's the director's poetic license, but that is not how I reacted." D'Amico also noted that he wasn't consulted for the series.

However, he isn't the only one who's taken issue with the series. The Versace family has made it clear they don't support the series and have called it a "work of fiction" in two separate statements. In the first, they made it clear that they "neither authorized nor had any involvement whatsoever" in the making of the TV series. After FX responded with their own statement, defending the series and stating that they "stand by the meticulous reporting of Ms. Orth," the family then responded again, reprimanding the series for choosing a book that is "full of gossip and speculation." The Versace family also called the producers of the show "sad and reprehensible" for using the book as the basis of the series.

Despite the backlash, the show has proven to be extremely interesting and I'm excited to see how Martin continues to portray such a pivotal person in Versace's life. The Assassination of Gianni Versace airs on Wednesdays at 10 p.m. EST on FX.