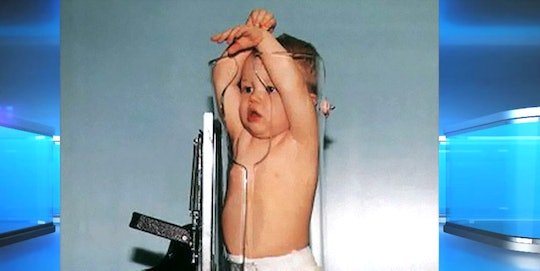 It's hard to argue with the fact that babies are cute. No matter where they are or what they're doing, they're going to be super adorable while doing it. With this in mind, it's no wonder that photos of babies getting x-rays have gone viral (yes, x-rays) because it emphasizes how cute these little ones are. People can not stop making jokes about this and you really can't blame them.

Babies are so adorable, especially when they're forced to be put in a tube to get their x-rays done. At least, that's what people on Twitter think. During the month of April, people on Twitter went wild over photos of babies "stuck" in life sized glass tubes. If it sounds rather simple this is because it is simple. People can't stop sharing photos of babies put in these tubes, according to BuzzFeed.

"I just found out this is how they x-ray small children and I can't stop laughing," the Twitter user, Professor Finesser, wrote on Twitter in late April.

"I thought these were test tube babies," one Twitter user replied.

You can't argue with the fact that babies stuck in tubes makes you feel some kind of way — whether that's sympathy or happiness from seeing them stuck. Sometimes, the most simple of things can go viral. It doesn't take much for people to become quickly obsessed with something — and these "babies in x-ray tubes" is currently that obsession.

This isn't the first time that these photos have gone viral. In 2015, people were just as perplexed by these babies shoved into the x-ray machine as they are now. At the time, the photo was originally posted on Reddit, according to Cosmopolitan, so of course people had a lot to say about it. Most x-ray technicians (who have x-rayed kids) chimed in saying that these machines aren't commonly used and most babies aren't that calm when they're in it. In fact, they get very upset when they're put in the machine.

"I just explain to parents that it won't hurt but it makes them angry," one Reddit user wrote. "Then they cry and take a deep breath!"

But some people even said that this is the only way they can get babies to comply with chest x-rays and it makes so much sense.

These machines are called Pigg-O-Stats — they're immobilizing x-ray machines that position infants and young children in a way that won't hurt them and will get the best x-ray. But people on Twitter were less concerned about the technical function of it and more enamored with the aesthetics of the machine.

And they've got jokes y'all.

Although the Pigg-O-Stat has been used since the 1960's, according to the Daily Mail, it is more common in the United States. This could explain why a lot of people are super unfamiliar with the machine and more perplexed by it than intrigued.

But it is super safe for kids to be in. Not only is it an effective way for babies to have x-rays done, but it reduces the amount of radiation they're exposed to, ensuring that they're getting their x-ray done safely and efficiently.

Although this machine might look hilarious, kid safety is nothing to laugh over.