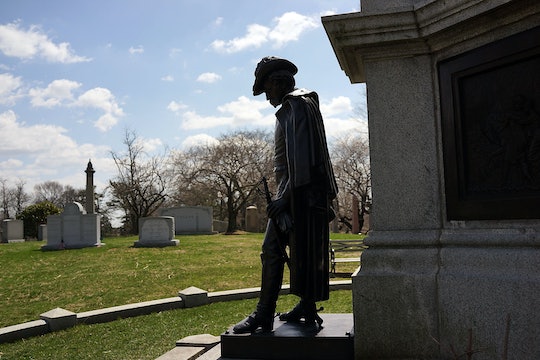 Photos Of Baltimore Removing Its Confederate Monuments Are So Powerful

In the early hours of Wednesday morning, the city of Baltimore had a bit of a makeover, and the photos of Baltimore removing its Confederate monuments are incredibly powerful. Taking down the statues won't erase racism overnight, but it's a step forward, and a signal that tolerance for white supremacy cloaked in regional pride might finally become a thing of the past. Baltimore officials had been discussing the possibility of removing the monuments for over two years, but the deadly white supremacist rally in Charlottesville, Virginia, over the weekend finally spurred action.

On Monday, the city council voted to remove four monuments, but it's unclear what will happen to them now. According to local ABC affiliate WMAR, Councilman Brandon Scott suggested they be melted down and recycled into "statues of true heroes of Baltimore," while Mayor Catherine Pugh is looking into preserving the monuments for their historical value. The Robert E. Lee & "Stonewall" Jackson Monument, the Confederate Soldiers and Sailors Monument, the Confederate Women's Monument, and the Roger B. Taney Monument were all taken down between 11:30 p.m. Tuesday and 5:30 Wednesday morning. "We moved as quickly as we could," Pugh told the Baltimore Sun. "I did not want to endanger people in my own city."

Despite the late hour, word spread that the monuments were being removed, and peaceful crowds gathered to witness the crews tear them down. Baynard Woods, editor at large of The Baltimore City Paper, described the scene as "celebratory," according to The New York Times. "The police are being cheerful and encouraging people to take photos and selfies." One by one, the monuments were pulled down with cranes, loaded onto flatbed trucks, and driven out of town under police escort.

Only three of the statues were actually Confederate monuments. Taney, Maryland's native son, was not a Confederate, but a Chief Justice of the Supreme Court under President Andrew Jackson. His claim to fame was 1857's Dred Scott v. Sandford decision, in which Taney argued that black people were property, not U.S. citizens. The Baltimore statue is a replica; the original still stands at the State House in Annapolis. Maryland Gov. Larry Hogan called for its removal on Tuesday, according to the Washington Post, despite referring to the removal of such monuments as "political correctness run amok" just last year.

Maryland was a Union state, not Confederate, but its residents were split, and the state is home to a number of Confederate cemeteries. Some residents have suggested these as new locations for the monuments.

On Sunday, Baltimore residents rallied to protest white supremacy, and placed a statue of a pregnant black woman opposite the Lee and Jackson monument, according to the Sun, her fist raised in defiance. She now stands alone in Wyman Dell Park, victorious.